I've been thinking about the overlapping purposes of accounts and config files and dreamed up a TwitterRC [1]:

Of course such a thing will never exist because no one would use it. But it would have a number of benefits:

One could likely make a twitterrc capable of most of these things by using chrome with some chrome plugin instead of lobbying this behemoth incentivized to prioritize low agency over power users at every turn making this whole discussion an instance of the law I made up last time.

In general I wish lots of websites and applications had text based configuration. Especially ones I conceptually use across identities. For instance I use chrome for work and personal use. But as of 2022 the settings state of the browser is tied up in my Google account, a form of identity I'd rather keep separated from my work identity [3]. Therefore when I start a new job I have to manually copy over the extensions and settings I like. It seems like it should be as easy as cloning my dotfiles repo.

But maybe customization is bad? I've seen it said "learning to use a tiling window manager is essentially giving yourself a specific form of brain damage" because it'll make it very hard for you to use another computer [4]. Vim is very customizable but all the bells and whistles I've added to my vimrc had made it basically impossible for me to use vanilla vim. Though maybe that's just because vanilla vim is impossible to use. I'm increasingly sympathetic to the perspective: "why do you want to fiddle with your computer like a nerd? Just do what you actually want to get done".

But maybe we should go the other way and vim should have accounts to manage your settings. Someone send this mock up to Bram Moolenaar: 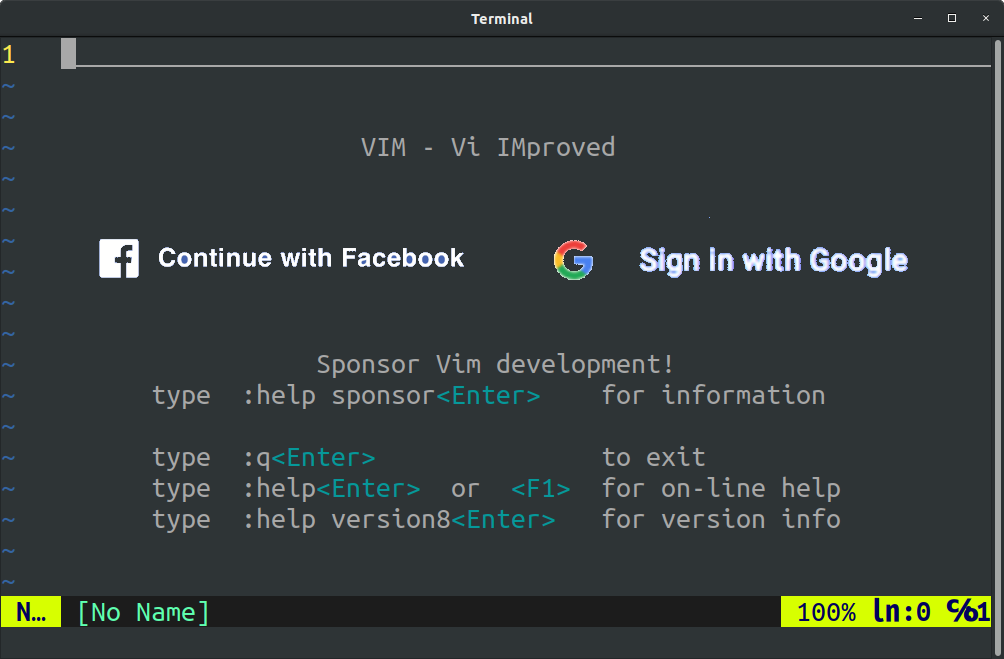 [1] I dreamed this up before Elon's takeover bid but please consider this.

[2] There are a lot of accounts whose sole purpose seems to be to bring you something dumb. I guess I understand the enjoyment inherent in feeling superior to someone or something. But to deliberately seek it out and share it or bond over it with others seems … disgusting. Perhaps I should simply unfollow someone when they retweet an account like this since if they do it in one context they probably do it in a variety of ways and contexts which are hard to capture with a few mutes.

[3] I did some digging in ~/.config/google-chrome to see if there was a de facto chromerc. I found some interesting files like ZxcvbnData/1/passwords.txt and .config/google-chrome/Default/Bookmarks but no easily editable file that just has all your settings.

[4] It's difficult to avoid such brain damage. I've gotten very used to Ubuntu keyboard shortcuts and the only slightly different MacOS defaults are very painful for me.