Peter Thiel's been in the news lately [1] so I thought it'd be a good time to write about the time I played him in chess. It was back in the summer of 2015, July. I was interning at Palantir. In the middle they had a intern week with fun events like a puzzle hunt, a boat ride and some talks by various tech people. On Thursday there was an event at Thiel's house. At least that's how it was billed. I'm sure he owned the house but I don't know if he ever lived at that one.

The shuttles left Palo Alto at 4ish and arrive at the house in San Francisco. The house is of course massive and beautiful. There's a lot of marble. There's an open bar and refreshments. I find the foosball table with my roommate Jeremy and some other interns. We crowd around, one person per pole. Foosball was one of my principle distractions for the summer. I never could get an edge on Jeremy. I had thought I'd acquired mastery of this all important tech skill at my previous internship but it was no match for his Singaporean army training. At least it was closer than our ping pong games.

After a while I rotate out because there's a huge demand to play. I wander around for a bit and up to the second floor where I find Thiel and a handful of other interns in a room with a life sized chess board. Of course Thiel has a life sized chess board room. Well I guess the pawns only come up to your knees so not really life sized. There are two interns already playing and Thiel is chatting with some people.

I find two of my friends from the summer, Gabby and Michael. We started in the same week cohort and ate breakfast together most days. Every day for breakfast that summer I had 2 apple sausage links, 2 regular sausage, 4 pieces of bacon, a plate of scrambled eggs and spinach, a smoothie and two cups of coffee. On Fridays there were donuts which I always had three of.

Thiel asks the two interns playing if he can have the next game and Gabby and Michael suggest we assemble team intern to play. I say sure as long as they understand I won't listen to any of their suggestions.

The game finishes up Thiel asks who wants to play and I immediately leap forward to challenge him. I quickly move to reset the board before anyone can suggest something more egalitarian.

I get the white pieces and open e4 with the general approval of the interns, best by test. Thiel replies with the Sicilian, c5. I remember my training and move forward to play d4, the Smith Morra, my weapon of choice. Gabby tries to physically hold me back, pointing out the square was covered. But I tell her we have no choice. I'm not going to play any open Sicilian lines. I'm not sure what Thiel has prepared but the idea of figuring out the Najdorf, Dragon or Svechnikov on the fly against an experienced opponent is untenable. Michael points out we can always recapture with the queen, which I suppose was an option. It's good to have options.

Thiel of course takes, there aren't really other moves and I blitz out c3. I reassure my fellows with stories of long term compensation. We'll be a half move ahead in development. We'll have two half open files. Black will have long term problems developing their bishops because e5 leads to f square weaknesses. They seem unhappy but we're committed.

Thiel opts to enter the Smith Morra with dxc3. e5 and e3 are both options which lead to a comfortable game for black. I do think the main line is most testing though. I of course play Nxc3. The Danish is more of a 1. ... e5 option.

Here Thiel pauses to find his next move. There are many options. Basically any natural developmental move is possible. I'm in full performer mode trying to assure our team that we've got enough for the pawn. I say our general plan is: develop our king knight and bishop, castle, put our queen bishop on the right square depending on Thiel's maneuvering, Get our rooks on open and half open files, attack, attack, attack. Hopefully we can prepare e5, which often comes with tempo, and can be quite awkward to meet. Thiel of course cannot play e5 without having a backwards d pawn and a dangerous diagonal to the f7 square so it's not really an option.

I'm not sure if Thiel was tuning me out or just didn't respect the Morra because he played e5 pretty quickly. I only had this position in tournament one time. It was round 7 of the 2011 World Open against a player 200 rating points higher than me. At that time I thought for a full half hour before playing Nf3 to remember my theory. My opponent resigned on turn 10 when I got the king, rook fork with my bishop on c6. 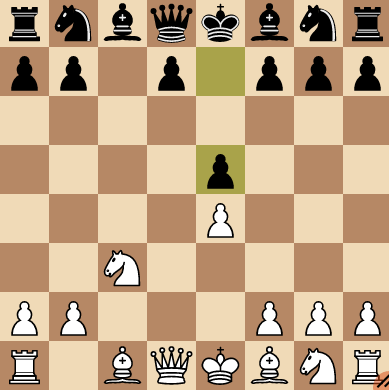 This time I just play a quick Nf6. I say our plan is to pressure f7, we should be winning at this point. Unfortunately I don't remember the whole sequence but the game lasts about 15 moves. We get a windmill pattern on his king which allows us to at least pick up his queen. Thiel resigns at this point as I discuss whether we should pick up the queen or look a little harder for a mate which I feel certain must be there. I always feel a little bad looking for a better move when I have a certainly winning one. I do this a lot in mtg when I'm confident I'm winning so I suddenly want to play around gut shot and Slaughter Pact. Tight play is tight play.

A 15 move miniature. Thiel has a good excuse (which of course he doesn't employ himself) because the whole game 20 interns are chatting him up for career and financial advice. I kind of think I wasted the interaction by not just doing the same. One of my intern friends says he recommended 3 companies to work at, the only one I remember now being Reddit (maybe Pinterest?) so maybe I didn't miss out on anything too insightful. It's not like you can get great advice from someone who just met you. Even if they are the mighty Peter Thiel.

After the game Thiel says It's not often you lose to someone who tells you their whole strategy and asks if I want to play again which of course I do. This time I have the black pieces and unfortunately I have sort of a sad repertoire there. I play the French and we get the Winawer variation. This game was a lot longer, maybe 70 moves. I get a medium position out of the opening and Thiel plays an unsound Greek gift sacrifice, which I embarrassingly didn't consider before it was played. I weasel out of it. He has two pawns for the bishop and my position is awkward, but I should be winning. I push a little too hard though, Thiel forces a trade of queens and suddenly we're in an endgame where Thiel has two doubled knight pawns, we both have a rook, and nothing else. I mutter some stuff about Philidor and Lucena and how maybe it's a theoretical draw but if it was I couldn't figure it out and I reign.

There was a lot of pressure from the event organizers in the last 10 moves. One was like the bus has to leave right now, and Thiel was like give us 10 more minutes and she was like well I guess if you're saying that, it's okay. So I end up resigning the position a bit before I would have normally but I'm quite certain if it wasn't lost, I wasn't going to be able to hold it.

We load up on the busses and that's that. I'm pretty sure the only things Thiel said to me were, it's not often you lose to someone who explains their whole strategy, You're pretty good at chess and Would you like to play another?. All in all a fun time. Two days later I biked from Mountain View to Monterey after getting back from board gaming at 3 am to win a magic tournament because my roommate thought I wouldn't. But that's another story.

[1] I actually started this blog, and wrote this sentence months ago, but it's perennially true.