Editor's Note: this one was partially written in the car so it contains some of Rhiannon's (R's) interjections. Hopefully the style is easy to follow.

After not talking to anyone besides each other for 3 years Rhiannon and I thought it would make sense to go to Washington. "We thought it would make sense to be stuck in a car together for four days" -R, Narrator: "It did not make sense". We would have left a weekend earlier but I had to play magic the gathering. "ughhh" -R. The day before Rhiannon was like "I don't think we should go. It sounds like a bad idea". She kept saying that as I packed the car. "Singledly Handledly" -R.

We didn't leave until almost 1 because Rhiannon had a zoom doctor appointment. Even less productive than a regular Doctor appointment. "Your fans are going to know everything about me" -R. Luckily I don't have any fans.

For entertainment we had a multitude of podcasts queued up. First were some bite sized science podcasts about sourdough and animal slander. Apparently Hummingbirds have tongues as thin as fishing wire with flaps that suck in nectar 100 times a second. Next was a fresh air interviewing the author of "See you on Sunday". No sir I will not be seeing anyone on Sunday. Well I guess I will because I'm driving to Rhiannon's dad's in Washington. I enjoyed listening to him spontaneously eating a sea bass while I ate my third cliff bar. Our reserves dwindle dangerously low just 10% of the way into our journey.

We saw a few wind turbine blades on the backs of trucks. I've never seen them transported before. There are so many wind farms in the midwest. We also see some great signs on billboards and trucks:

Every community has a different Coronavirus catch phrase on their road signs. Giving their own unique perspective on the crisis.

The midwest is nasty:

Our plan for sleeping on the first night was to stop in a small park that showed up on the map in Iowa. Google asks no questions when you ask for directions to an irrelevant land mark 8 hours away. When we got there we discovered it closed at 8 pm and has a gate to keep you out. So we tried an ultimate frisbee course which seemed too exposed, and then a graveyard, which was perfect. We parked in the back on grass, moved our luggage to the front and unfurled our sleeping pad and bags. We brushed our teeth with bottled water and relieved ourselves. All night I tossed and turned since the prius was slightly too short for me to fully extend my legs and the pads inflateable pillow was leaky on my side. All night I worried some Western Sheriff type would knock on the window and tell us to move along. Or worse lock us up in corona infested cells. In the middle of the night it started to rain. At first Rhiannon didn't want to close the windows because of all the stinky farts. But eventually we had to close them. No wonder we rose at 5 am and after a brief walk through the graveyard we were on our way. We snapped a picture before we left. 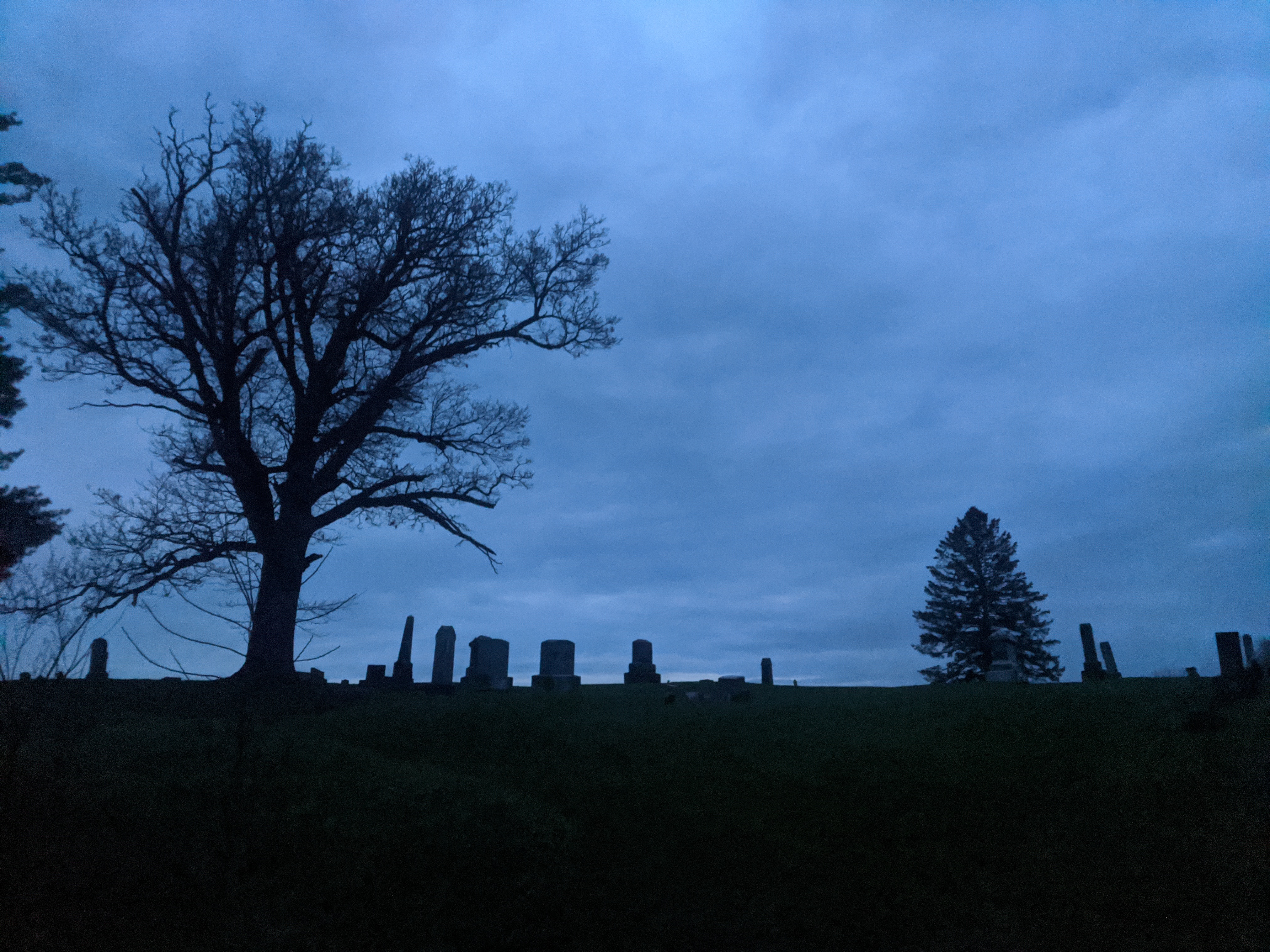 As soon as you enter South Dakota you start seeing signs for Wall drug. "Kids love walldrug", "Coffee 5 cents", "free ice water", "experience priceless", "Wild west bronze scupltures", "76,000 square feet", "timeless", "Walldrug: Only 201 miles to go", "six foot rabbit: wall drug", "YOLO: You only live once: Wall Drug". The store of Wall Drug is 400 miles from these signs. Other amusements like the Corn Palace (the only one according to signs places reasonably 10 miles in advance) and the Sioux Falls. We actually stopped at the Falls. We got lunch at a cafe. Which shockingly had a customer with a coffee at their laptop. It may be the end times but some things never change. The falls and the food were quite nice. 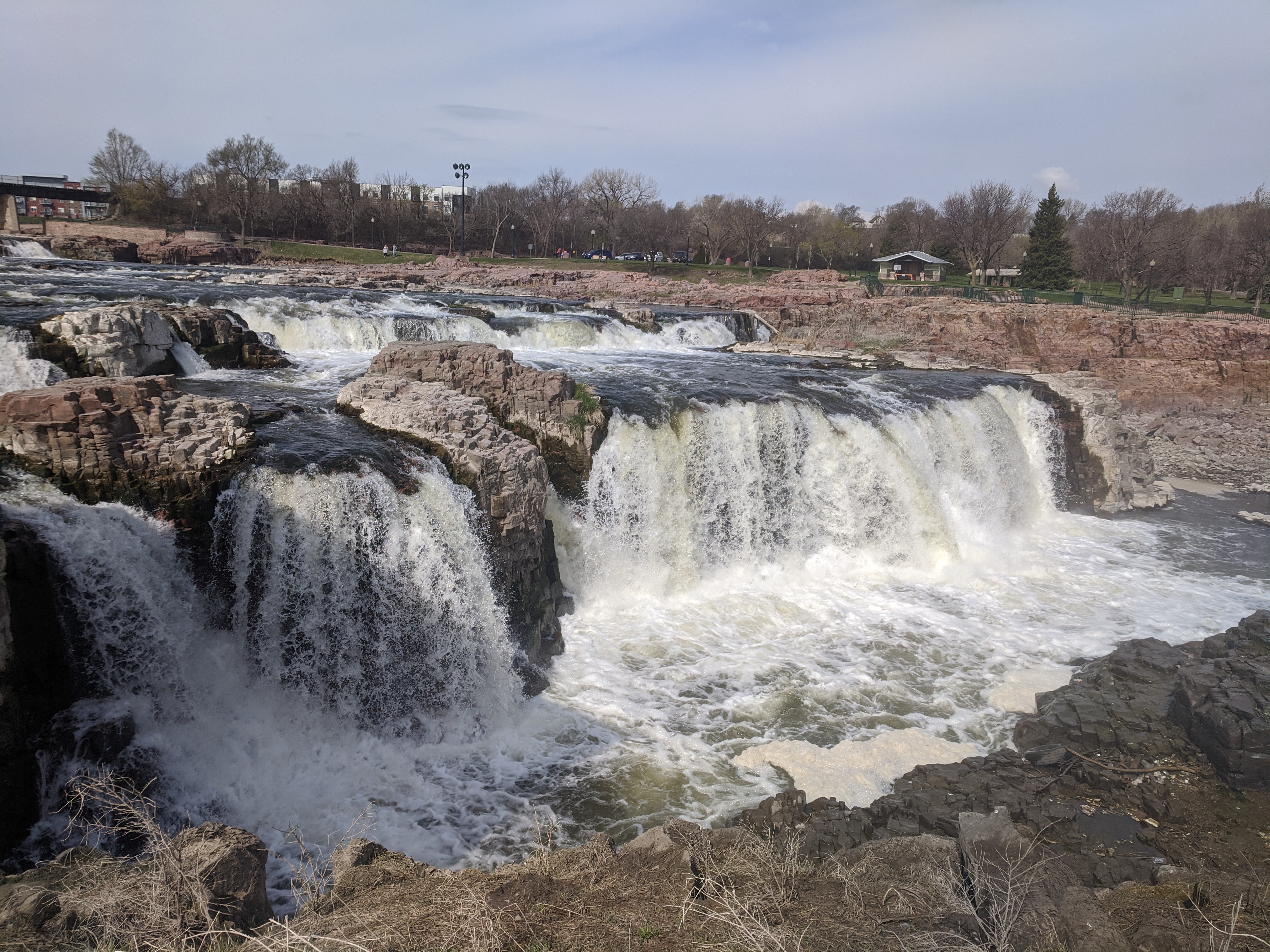 Halfway through South Dakota we stop at a magnificent rest stop with views of the Missouri River. Also a breathtaking sculptor. It reminded of Jesus the Redeemer. There were trails that seemingly went all the way to the river but we were too hurried and fearful of rattlesnakes (and black widow spiders) to explore them all. 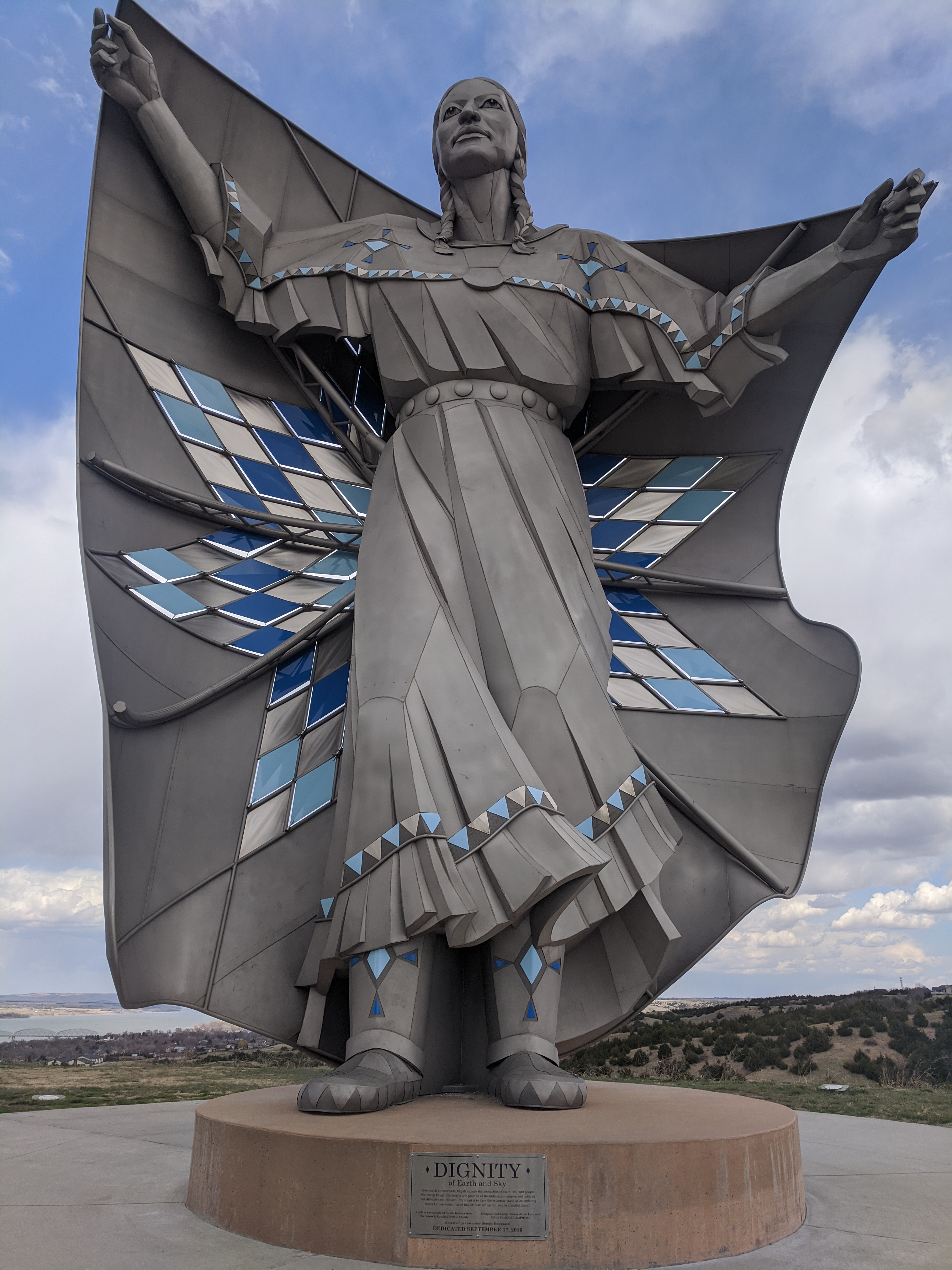 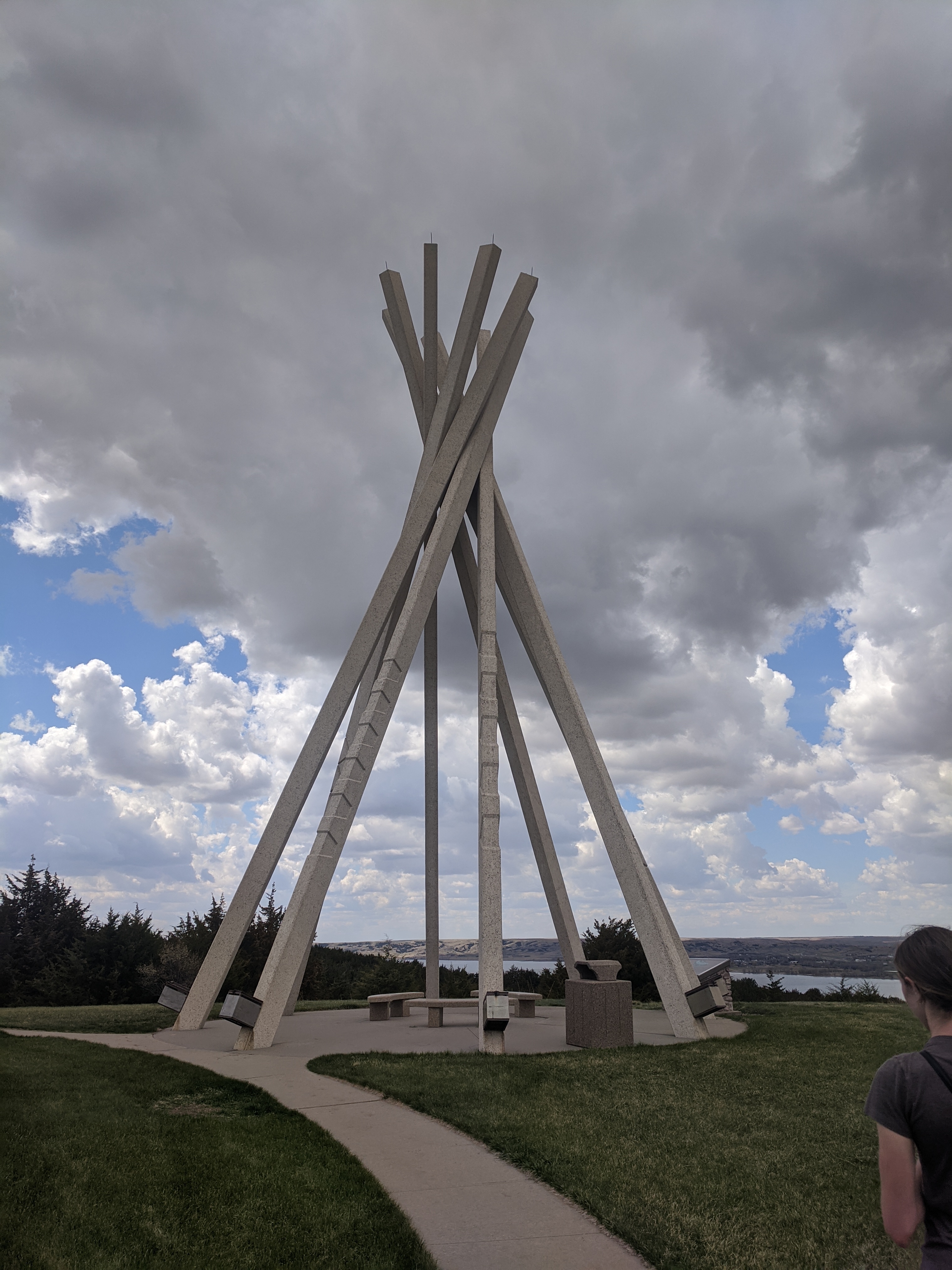 Montana is the Australia of the united states. 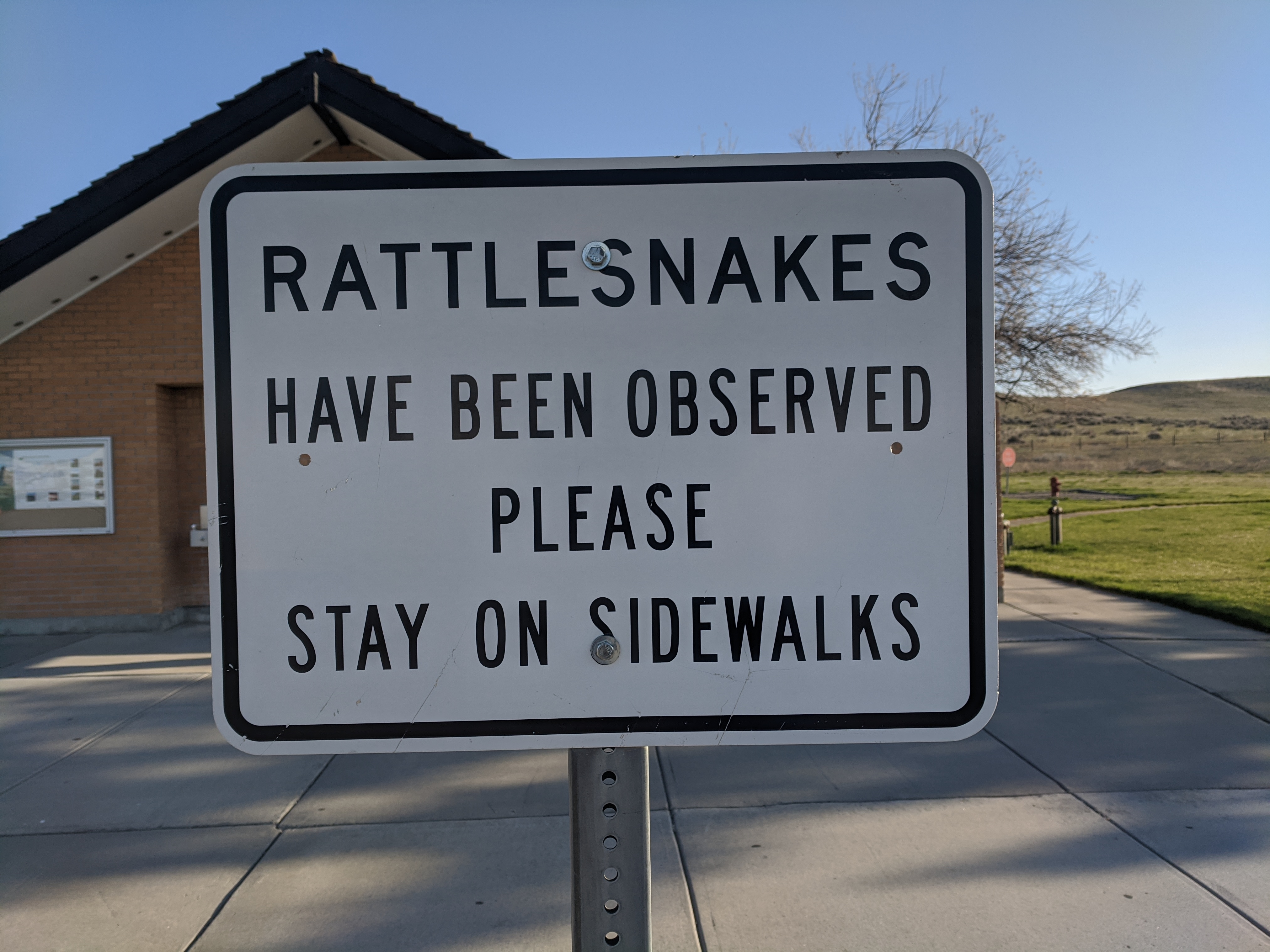 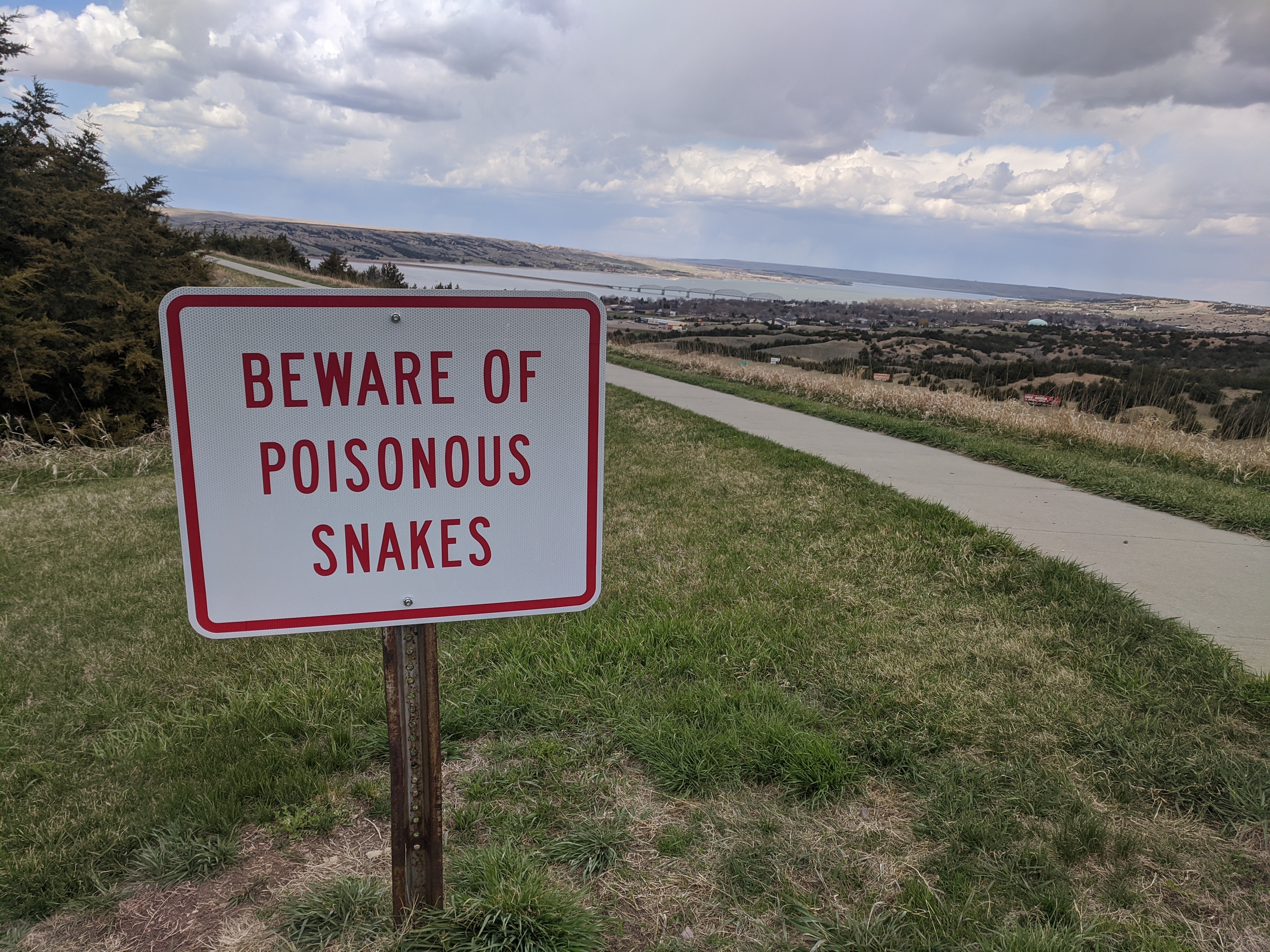 200 miles and uncountably many signs later we round a corner into a valley with a cornicopia of wall drug signs. We already knew it was closed because of two or three earlier signs warning us but we wanted to switch drivers so we decided to stop there anyway. It was a sad block of closed store fronts. There were half a dozen or so other people who didn't let its closure stop them from checking it out. An employee walked by and entered the cafe, giving us a look that expressed utter bewilderment that so many people would stop to see a closed drug store. But I'd seen more ads for it than for two MIT graduates who can pair wine with chocolate. So I had to see it. At least we saw the huge dinosaur that greets you at the exit. 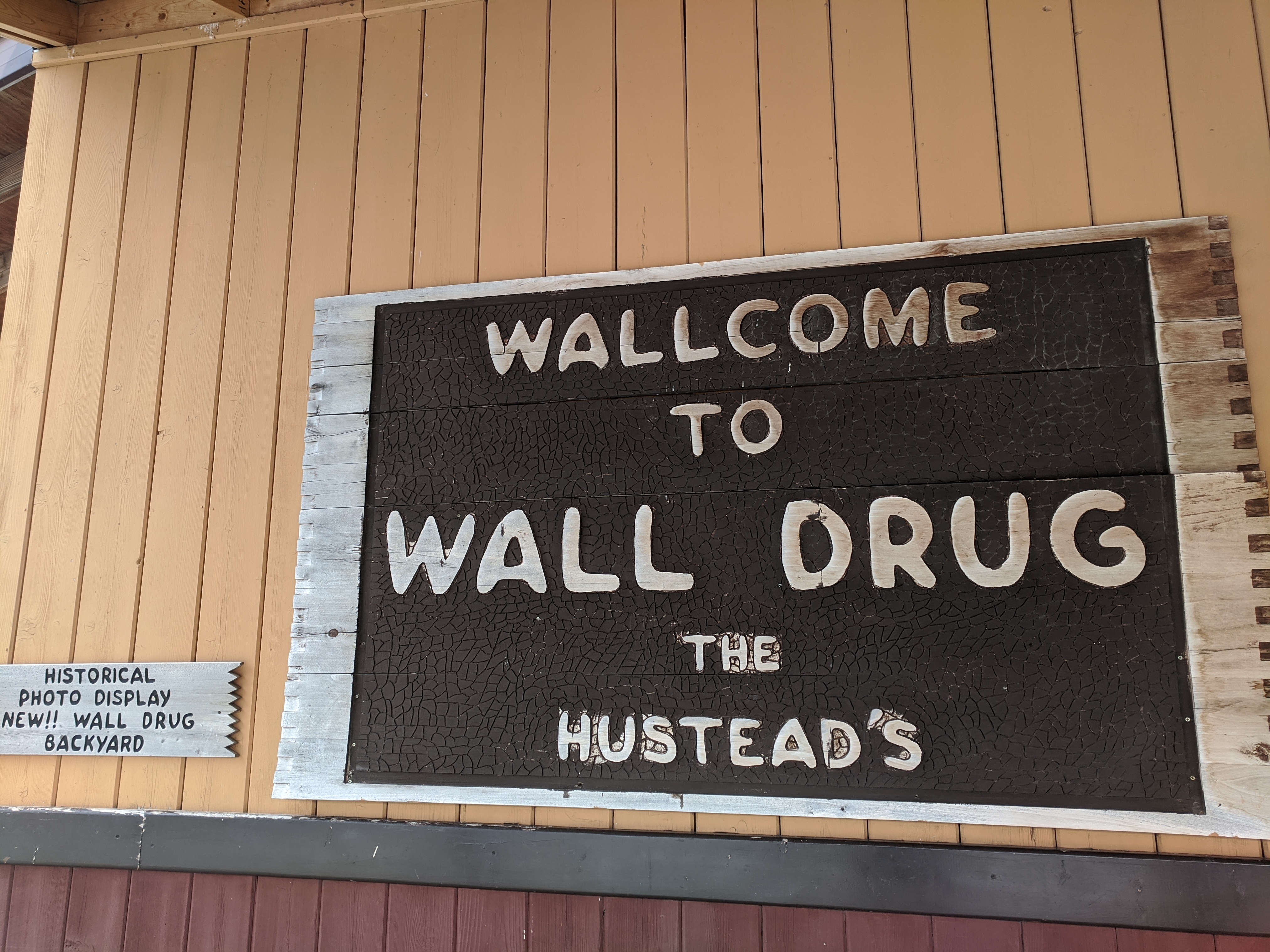 The world changes when you make it to Montana. Iowa feels full. Full of corn fields. But Montana. Montana is empty. The whole highway through Iowa is flanked by well farmed fields. And beyond the horizon I image them extending North and South to fill the whole state.

We planned to stop for the night in Broadus. Broadus is 100 miles from the Montana border but features a welcome to Montana center. The town features a cute coffee shop, a sleazy motel and an Antiques store. It was a cute town. It would be nice to spend a morning there after the pandemic. The RV park we wanted to stay at was another three miles down the road though. No one was in the office so we called the number on the door and they said they'd call their sister. But sister must have heard us talking because she came out while we were on the phone. We shouted at each other from across the yard. It was hard to hear each other over the baby lambs screaming. After she understood we just wanted to sleep in our car and were prepared to hold it she said to slip a 20 through the office mail door, pull around and feel free to pee anywhere. One last thing: watch out for the goose. He's mean.

As we drove into a camping lot the goose literally charged the prius. It's two duck crownies quacking it on. We huddle in the car until it loses interest. We get out and start moving our luggage to the front when the goose comes back. A neighboring RV man laughs at us. He says "watch out. It bites". I ask what to do and he says "There's nothing to be done. I've been dealing with this goose for three months". It lunges at my ankle and I scurry. The RV man laughs harder and says this is the funniest thing he's seen in a while. Eventually the goose leaves us alone and we finish preparing for sleep.

Right next to our camp sight are a turkey and sheep in a fence. They seem to be best buds. The turkey is really nuzzling up the sheep. They watch us the whole time we unpack. There are lots of sheep in different fences. 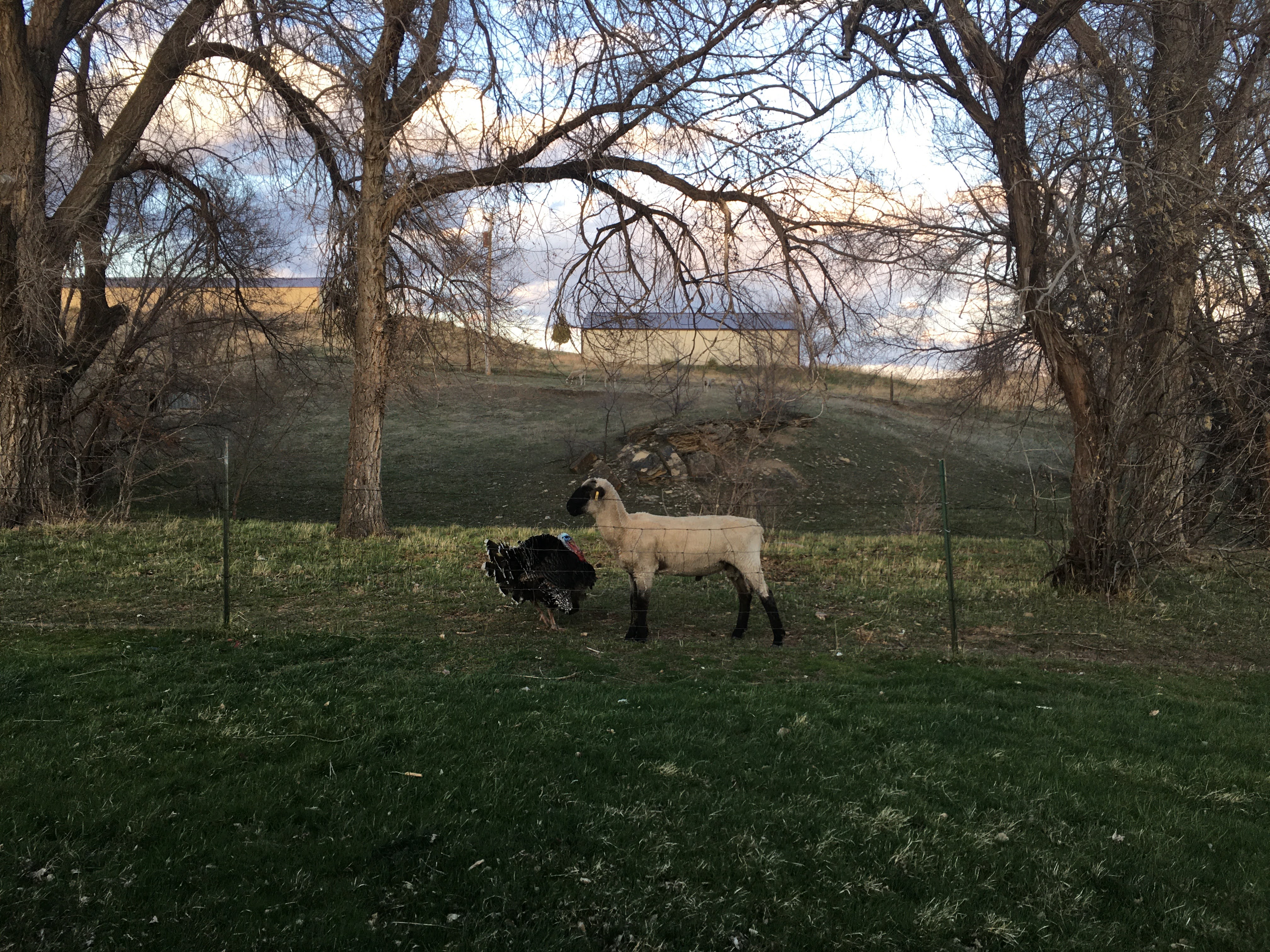 It's only 7:30 so we go for a walk around the farm area. It's so loud with birds, insects and frogs. The sun sets at 8 but we don't stay up late enough to really see the stars. There's a car trail in an empty prairie which we walk along for a bit. There's a beautiful pond. In the middle of the night Rhiannon wakes up to pee and wakes me up to see the stars. There are so many stars. They seem bigger than usual. Not just brighter but wider. They were everywhere. They covered the entire sky. The moon was just the thinnest of slivers.

We wake up at 5:30 again. Luckily the goose was no where to be seen. The RV Park owner was up and wished us a good trip from the safety of their truck. For some reason Montana seems to be taking the pandemic more seriously than South Dakota. When I started this roadtrip I expected Iowa to flow into South Dakota into Montana into Idaho with no obvious difference. But in fact each state has its own flavor. Montana's grass is tan and the hills are a reddish clay. It feels like a breaking bad scene set in Mexico. Rhiannon takes the first shift and we're off to Billings. Fun fact Billings is the largest city in Montana. I step into the gas station for coffee and some chocolate to surprise Rhiannon with. The coffee lids are individually wrapped and there's a square of plexiglass hanging in front of the cashiers. I'm the only one there. We get gas there and swap and we're off to Butte. At Butte we take a longer stop and walk through a tiny city park, Father Sheehan Park. There are two elderly people playing tennis. They were really good. There's also a river and a bathroom which is tragically locked. It's Rhiannon's shift again until Missoula, MT. Along the way we eat the Reese's Peanut Butter cups I picked up hours earlier.

On the next leg towards Coeur d'Alene, a very French sounding town for the middle of Idaho, we listened to a Stuff You Should Know podcast about Coyotes. We learned all kinds of fun facts about how they've been spotted climbing trees and the effect wolf depopulation has had on their range. Around this point our plan solidified into going all the way to Concrete, WA tonight instead of finding some quiet field to crash in for one last night on the road. We got in contact with Rhiannon's dad who started giving us weather updates. He warned us we'd hit a storm on the way to Spokane. It ended up not being a big deal though.

Eastern Washinton after Spokane is amazing, rolling green fields forever. Driving through Iowa it's like you're at the bottom of this valley the whole way through. In Washington it feels like you're on top of the world. The horizon is so close. And after it nothing. We stop for McDonald's and gas and swap for the final time. Going through the McDonald's drivethrough I go right over a tumbleweed. I thought it would just break apart and be no big deal. But it stuck under there! While we were getting gas I had to get on my knees and pull it out piece by piece.

The sound track through eastern Washington and the mountain pass before Seattle is post rock. Lot's of Explosions in the Sky and Mogwai. It matches the majesty of the fields, lakes and mountains. Here's some pics I snapped from the car but they really don't do the place justice. 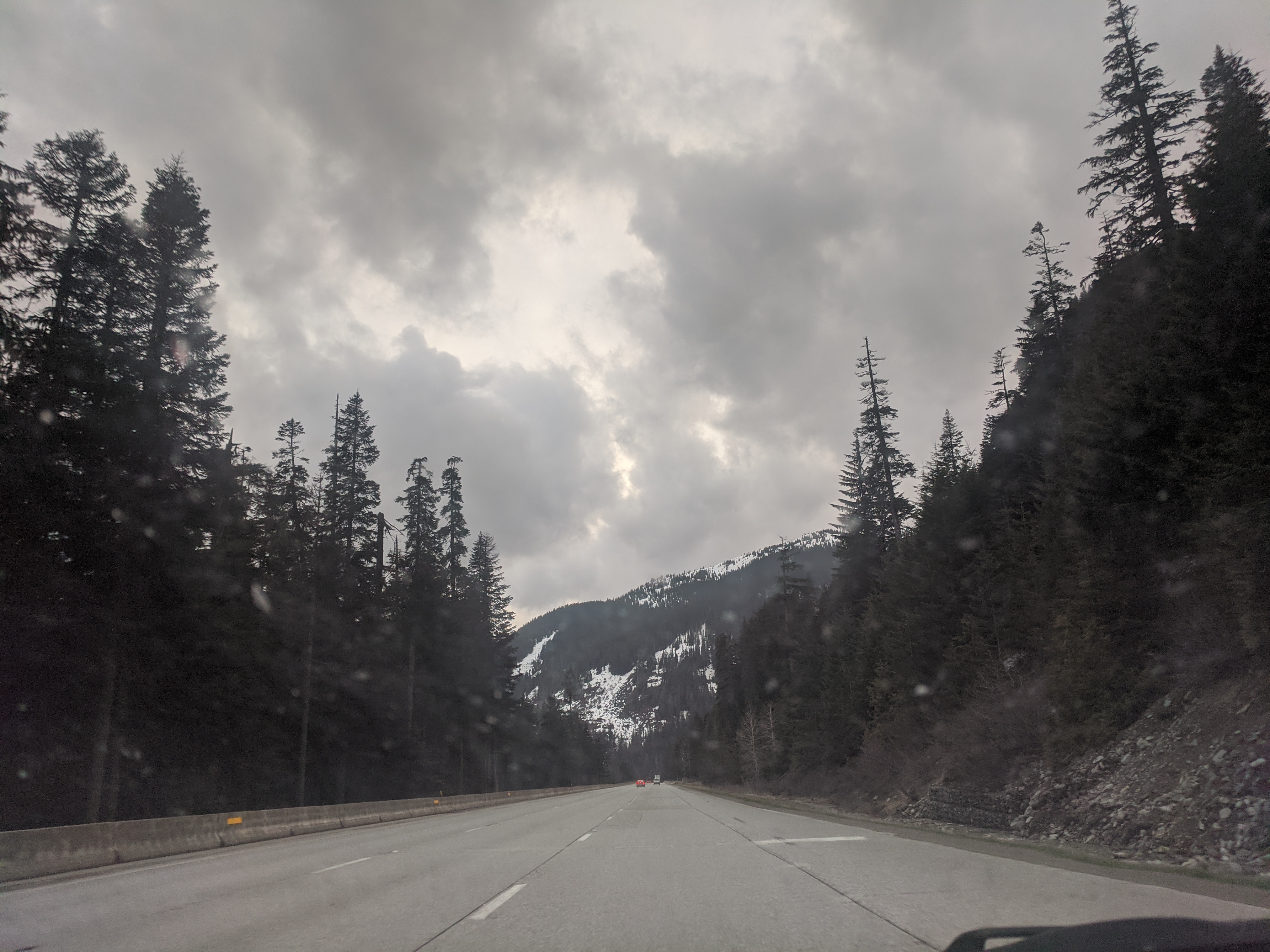 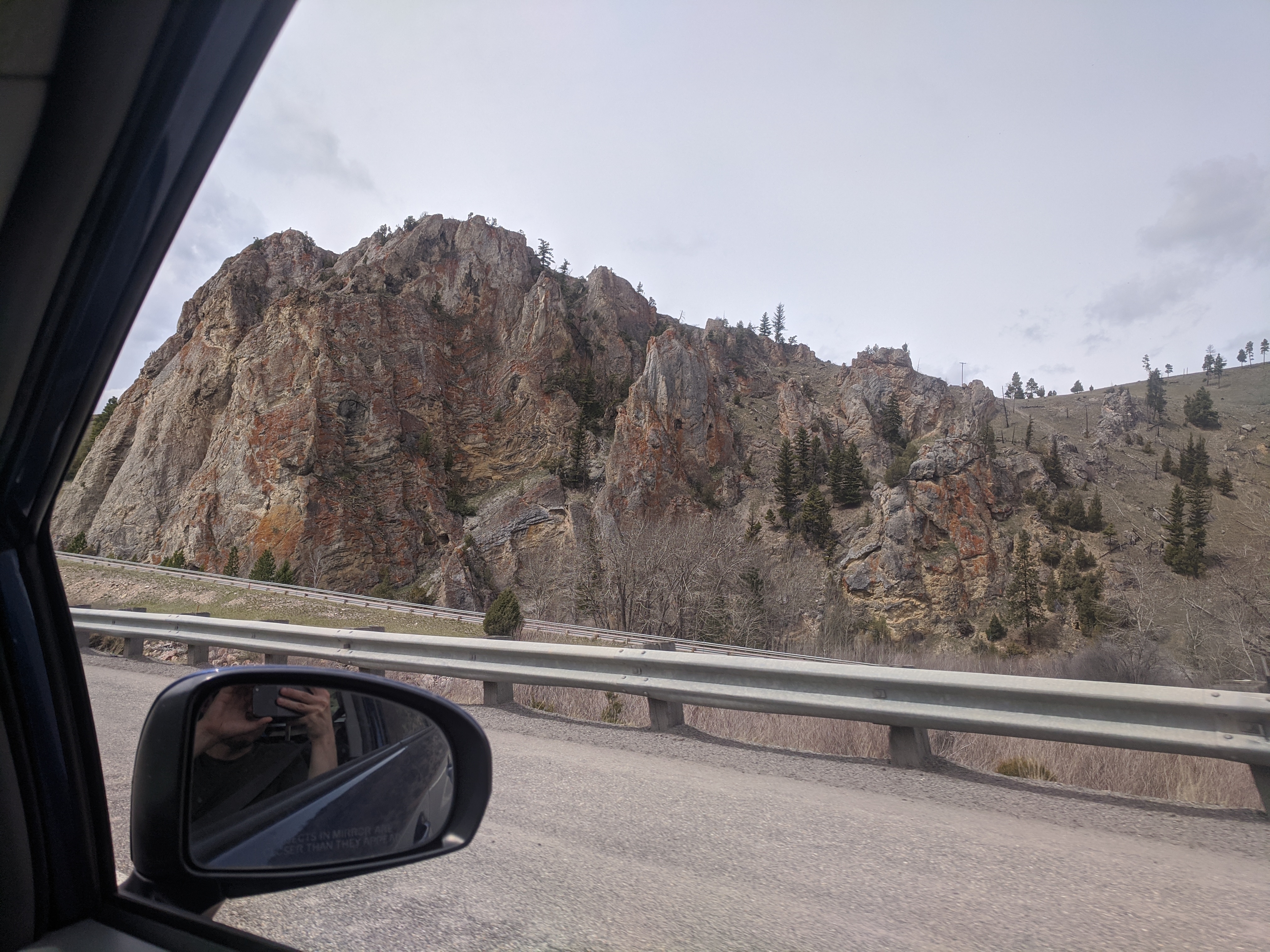 The drive after Seattle is uneventful. Its a scenic drive during the day but at this point its pretty dark. We roll into Rhiannon's dad's a little after 10 pm and plop right into bed. I sleep so well. I'm back to doing math all day and mostly staring at screens. But when we take breaks its a little nicer now. 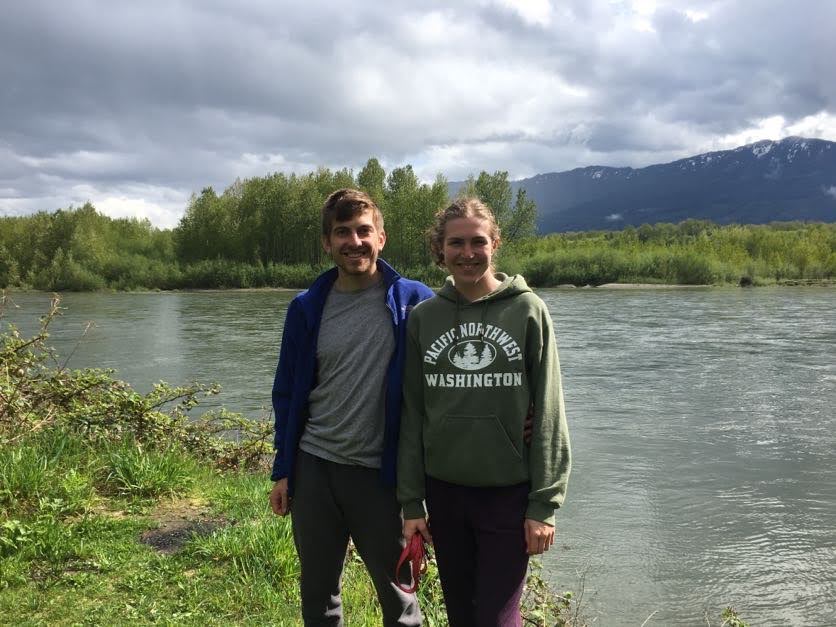 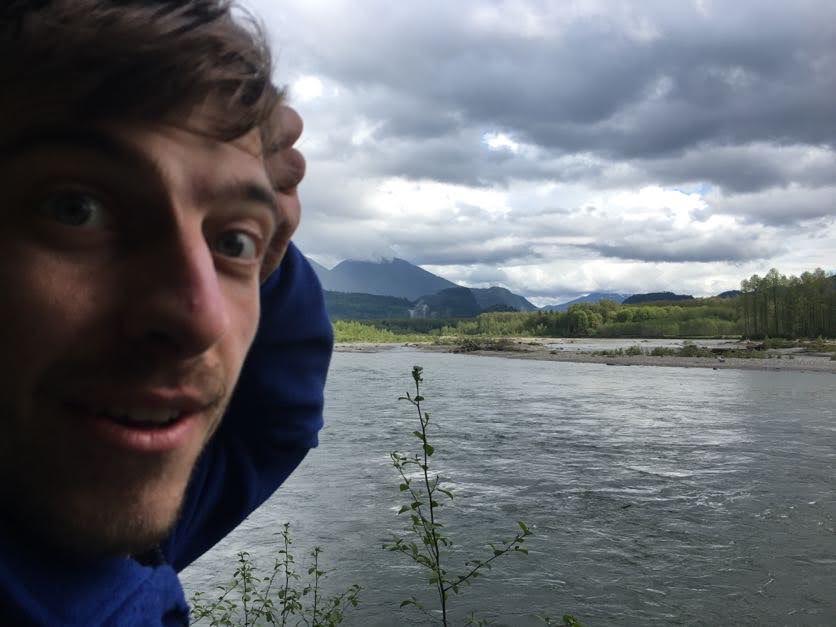