As the pandemic closed in and Amazon's review estimates got longer and longer I panic bought two board games with the very objective process of looking at the board game top 100 list and choosing two games which I recognized but hadn't had the pleasure of playing. All I knew about Patchwork before buying it was that it could not in fact be found on Amazon (I purchased it on EBay) and it was designed by Uwe Rosenberg, better known for Agricola (which I have only played once at 11 pm at the start of a all night board game marathon) and Caverna which I've played three times and like quite a bit. My impression is Caverna is just Agricola made again. Perhaps slightly cleaner and with a funner theme. It seems like a lot of great authors and board game designers have really only written one book or made one game. I can't really blame them. If I ever have a single good idea in my life I'm sure I'll milk all the mileage out of it I can.

But that's not Uwe Rosenberg! Doing more research for this blog post I learned he also made Bohnanza, an open trading bean game. I've only played it one, while drinking, but I liked it a lot. For the most part I hate open trading games. But most of my experience with open trading is it being tacked on to games that would have a lot of other things going on, like Monopoly and Settlers of Catan, two games I've played a lot of in my life and now hate. The thing that's awful about open trading in those games is the games is that its just this side thing that allows for kingmaking and slows down already very slow games. If I need wheat I'm not going to start by offering 3 wood for one wheat even if that's a good deal for me. I'm going to see if anyone wants to give me 3 wheat for one wood. Similarly its very important to ask the owner of Boardwalk if they've changed their mind about selling every single turn. But Bohnanza is all about making deals and defrauding your friends. The open trading is the game, not a distraction from the combinatorial puzzle and random dice rolling which is the game really.

Patchwork is also very different from the heavy worker placement games I know Rosenberg for. Patchwork is a really good game for Rhiannon and I because the game we've played the most before that was Blokus. Blokus has the feel of tetris and Go. A game with no knobs to turn. A perfect mathematical object drawn from the aether as a whole and complete game. I'm sure it didn't happen that way. And I suppose there are a few knobs: board size, what size polyomino you stop at. The two player version feels a bit artificial and the four player game has all the problems every free for all game has. But nothing feels arbitrary while you're playing. In the words of John Green on Tetris: "It's not grand or ambitious. It's merely perfect." Patchwork forgoes the simplicity and purity of Blokus but in exchange gets a lot more replay value.

The game starts by randomizing the order of the polyominoes you play with. Here's the setup to our fourth game. (Unfortunately I didn't take any pictures of our first game but it's very important that you know Rhiannon won that one. Despite the lack of physical evidence) 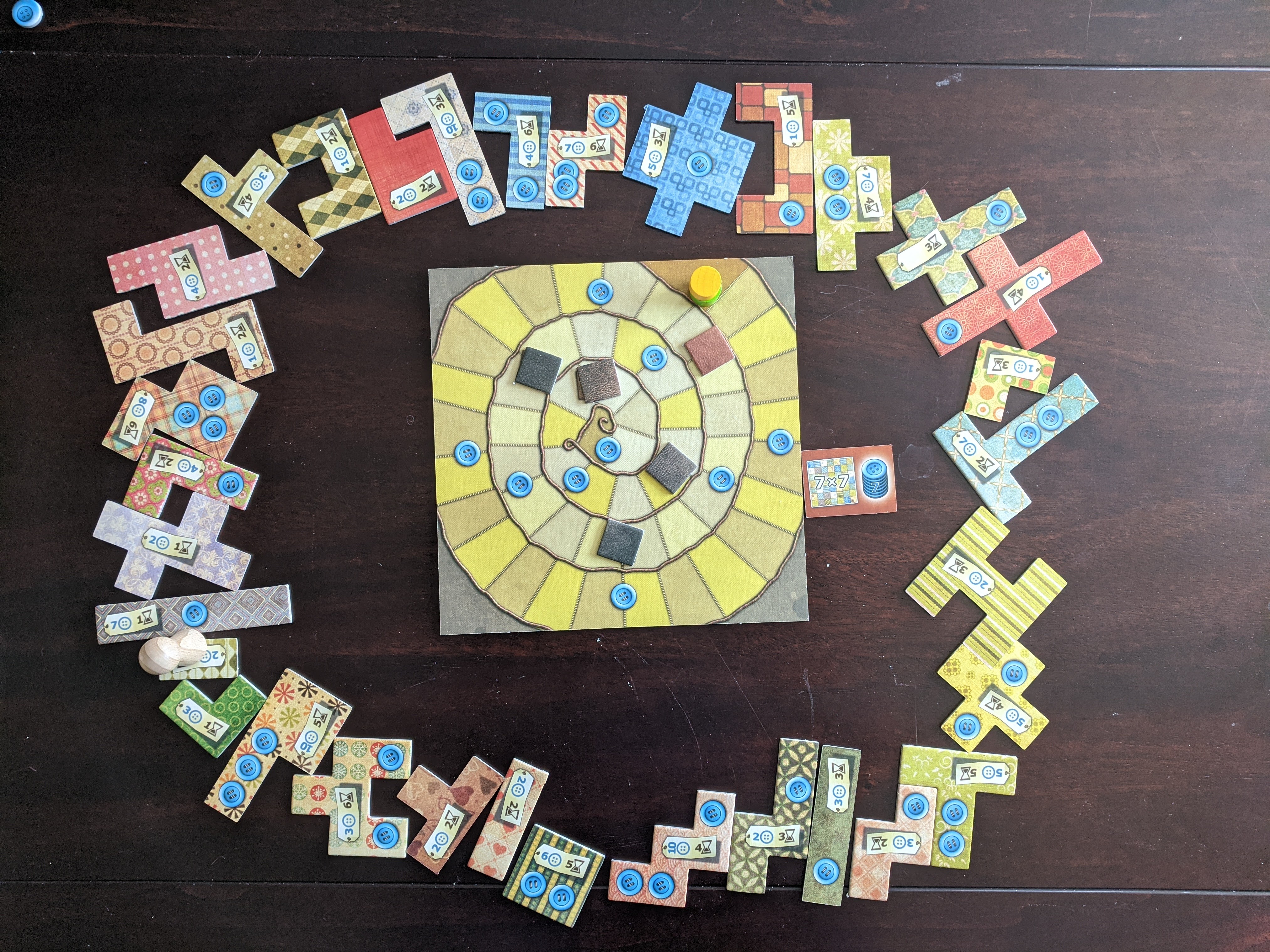 The polyominoes each have a cost in two units: time and money. Just like everything else in life. Time is managed on the central track. The players don't take every other turn. The players take turns while they are behind on the track. Every polyomino they take advances them on the track until they eventually pass their opponent. If they can't afford or fit any blocks then they have to advance their pawn to their opponent's, collecting an income of one coin for every square advanced. The only other way to get money is by passing the buttons on the track which give you an income of one button for every button on polyominoes on your board.

The polyominoes have payoffs along three distinct axis: area covered, dividends and complexity. The first is very important because at the end of the game every uncovered square costs two points. Rhiannon and I were pretty bad at the game at first because at the end of both games we've played we both left a substantial area uncovered compared to the example scoring given in the rule book. Some blocks yield dividends. Every time one passes a coin on the game track one receives a number of coins equal to the number of coins on blocks on their board. These become less valuable as the game goes on and there are fewer coins left to pass. The complexity of blocks is a more abstract thing. Eventually one wants to cover their whole region and different blocks leave behind gaps that are easier or harder to fill. I think this is one of the deeper aspects of the game. There aren't really that many polyominoes. They are arranged in a circle and one seems to go around about twice. The second time there are fewer so it goes a little faster. I think one should plan ahead for the complicated blocks their opponent won't be able to profitably take by leaving appropriately sized blocks for them in their tableaux. In our third game I successfully planned to take the X polyomino many turns in advance. Much like Blokus for which I have a body of theory about the relative utility of the different pentominoes but every game I find I'm stuck with some five that I think of as versatile or I wish I had some five which I tend to dump early, appraisal of the blocks in this game seems difficult.

All the polyominoes are unique. There are three pairs that don't have unique shapes though. 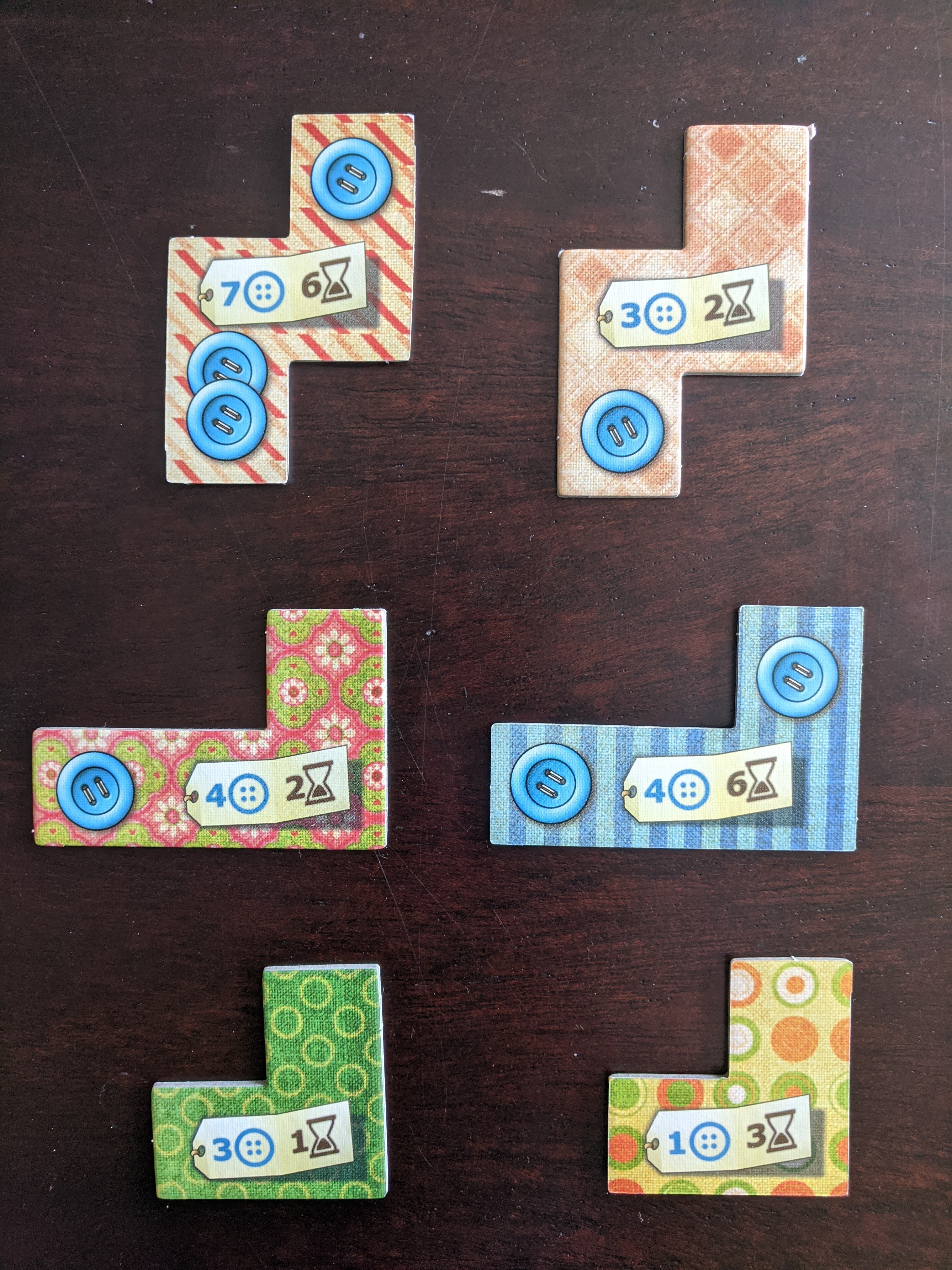 From these we can get a rough sense of what the game designer thought the proper exchange rate between coins and time are. From the elbow blocks you can see that time and coins are equivalent at a one to one rate. That makes some sense because you can always advance for coins at a rate of one to one. But I would have expected the blocks to give a discount since you always have the option to advance. From the other two blocks you can see the game values a button on square at a rate of four buttons/time units to one. There are nine buttons on the track so that means buttons are good deals at the beginning of the game and pretty costly at the end of the game.

There are so many tiny details that give the game great flavor. The spiral board your pawns walk, tracking the progress of time in the game, has two sides. One has clean spiral curves and the other has a more complicated quilted texture. A simple board for first timers and a more artsy experience for veterans. 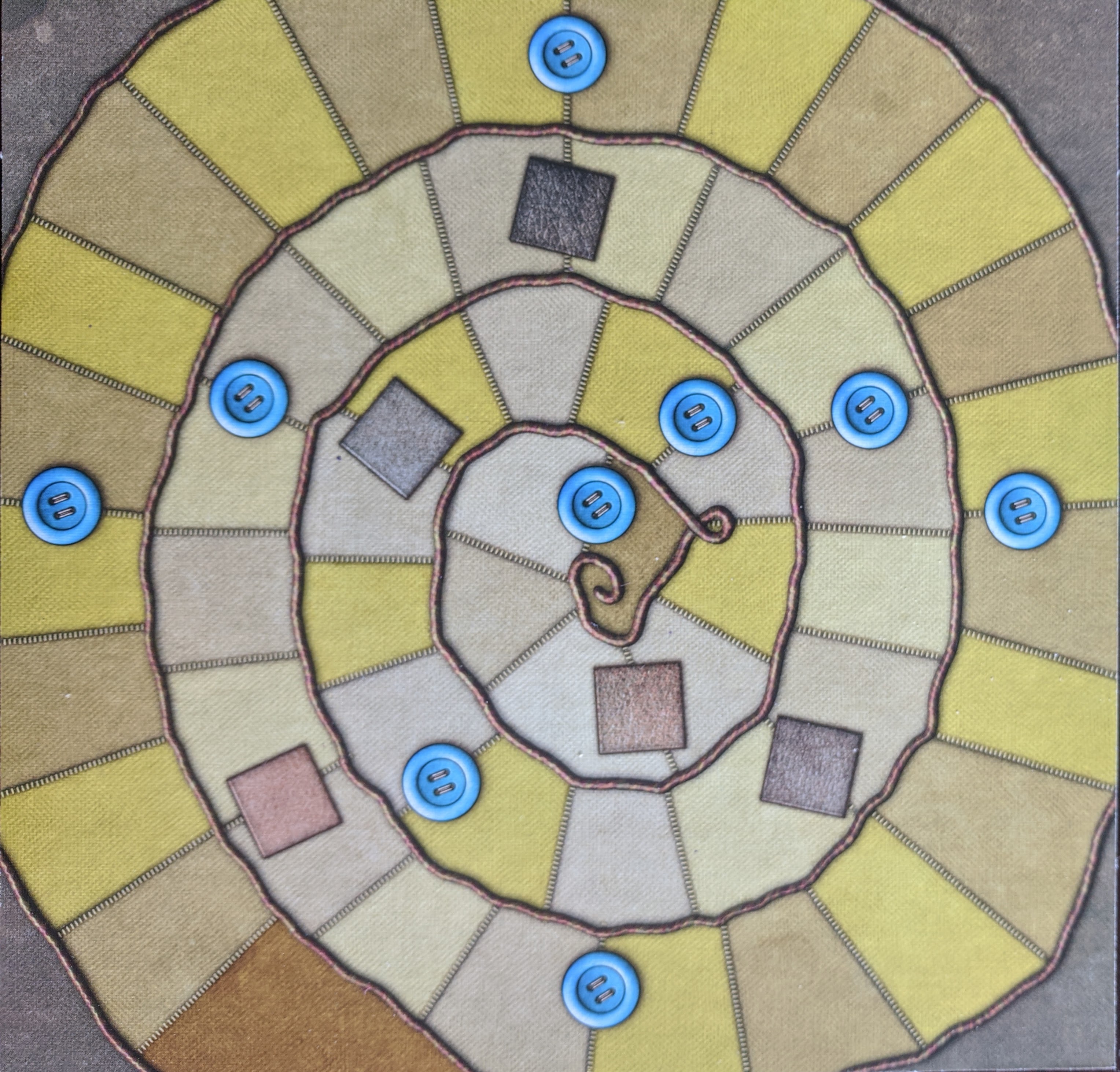 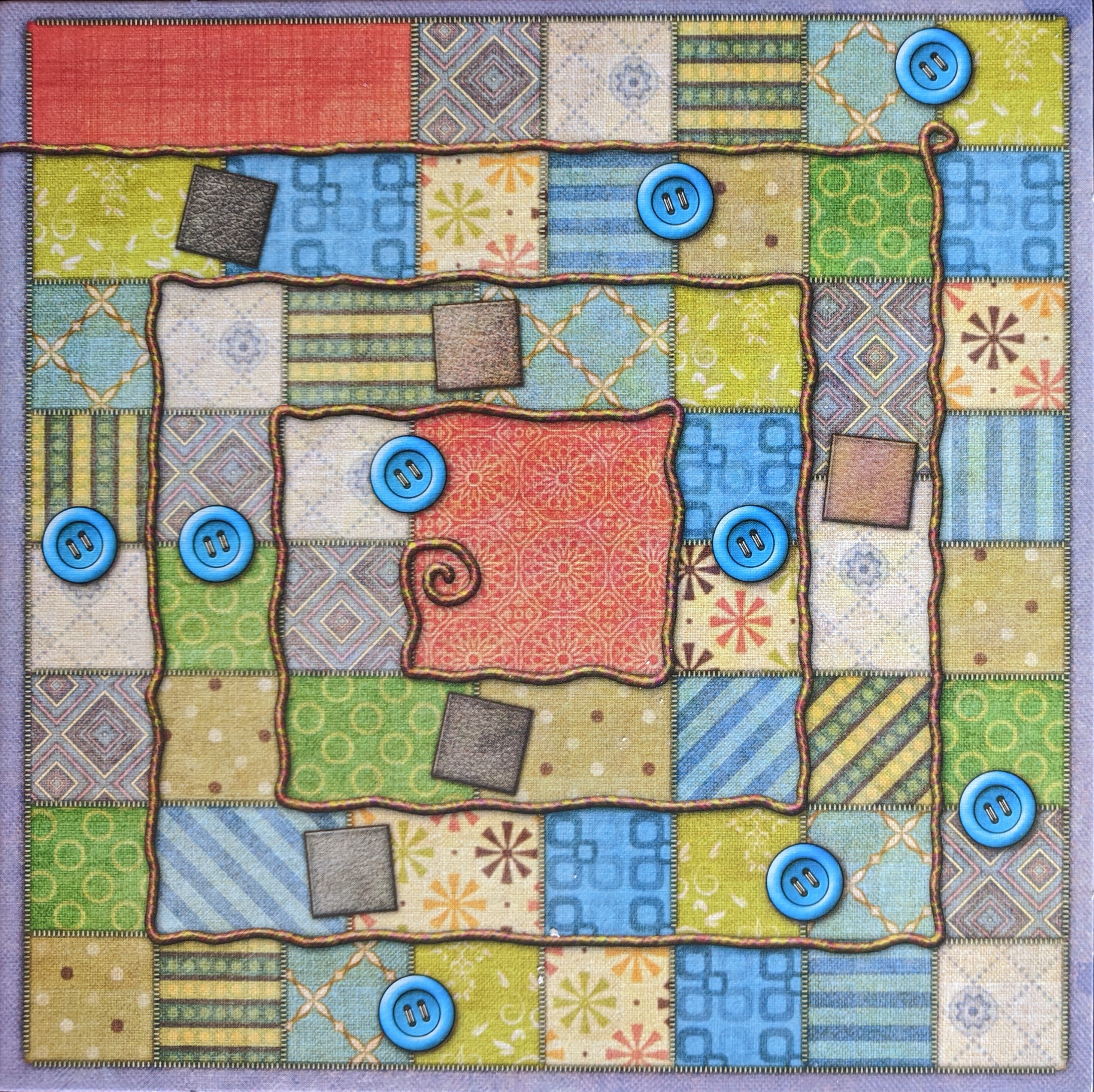 There are a lot of tactics around the dividend and patch deadlines. Often one wants to pay a larger cost in clocks in order to insure that when they get the turn they'll have a stockpile of cash allowing them to pick up a choice block they expect to be available to them on the following turn. Ending your turn right before a patch is a disaster because it insures that however your opponent plays they'll pick up the patch.

Here's Rhiannon and I's board after a few block pick ups in our fourth game. I'm on the left and Rhiannon is on the right. Rhiannon also has the play and is three squares behind. 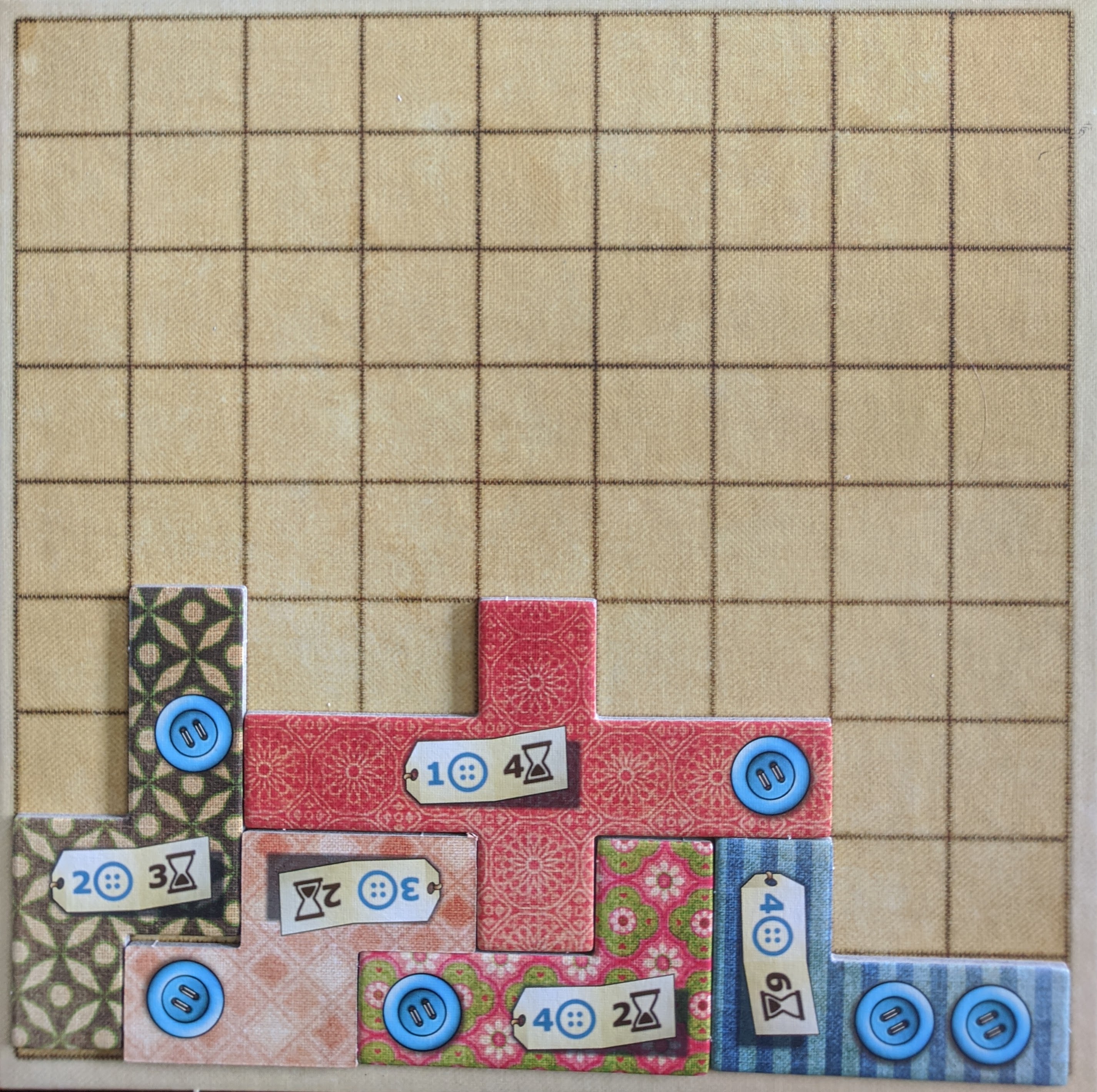 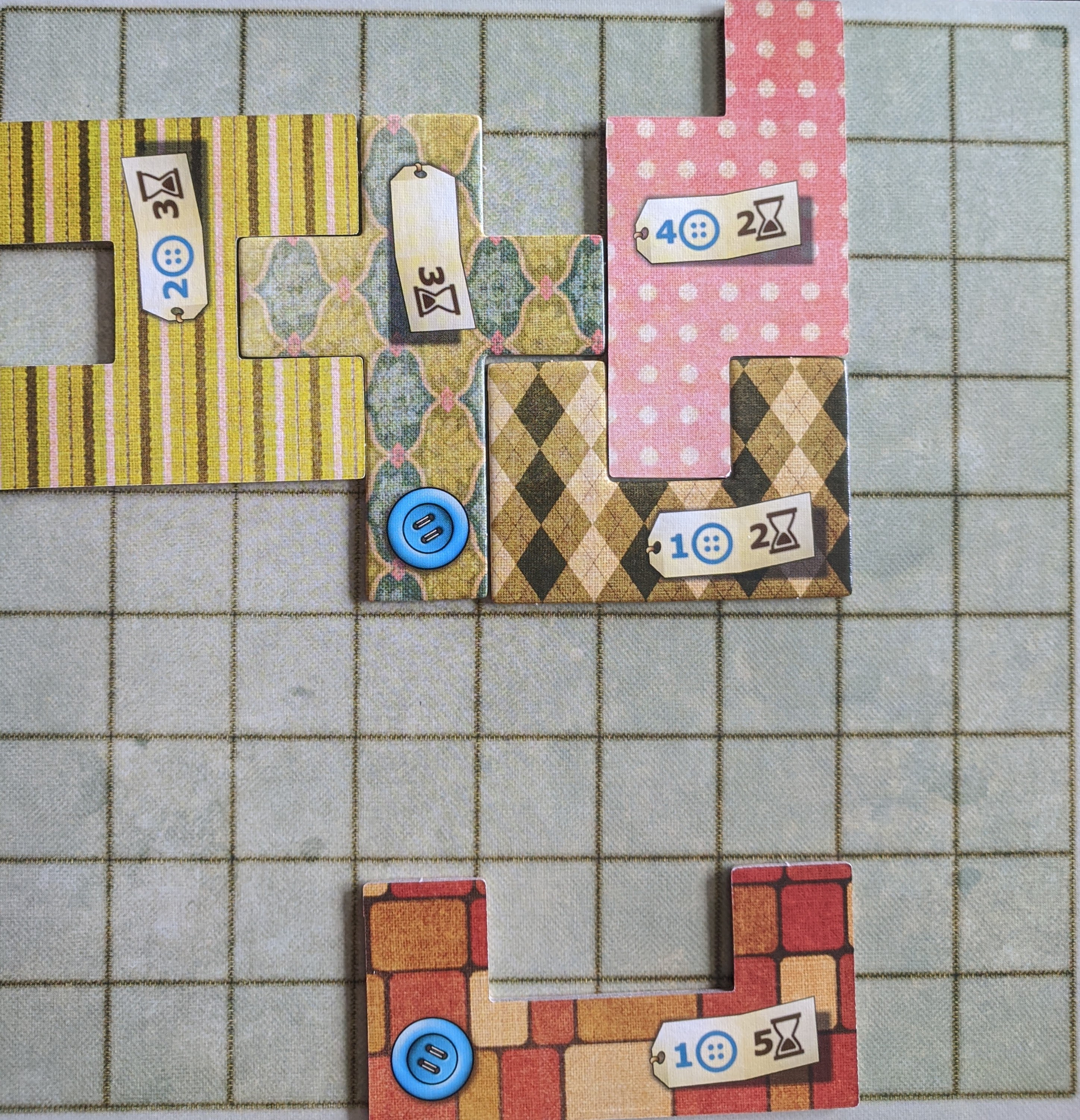 You can see that Rhiannon is ahead in squares covered but I'm ahead in patches on board. As the game evolves my monetary policy snowballs (and Rhiannon gets sort of demoralized. But remember she won the first one!). Our final boards look like this: 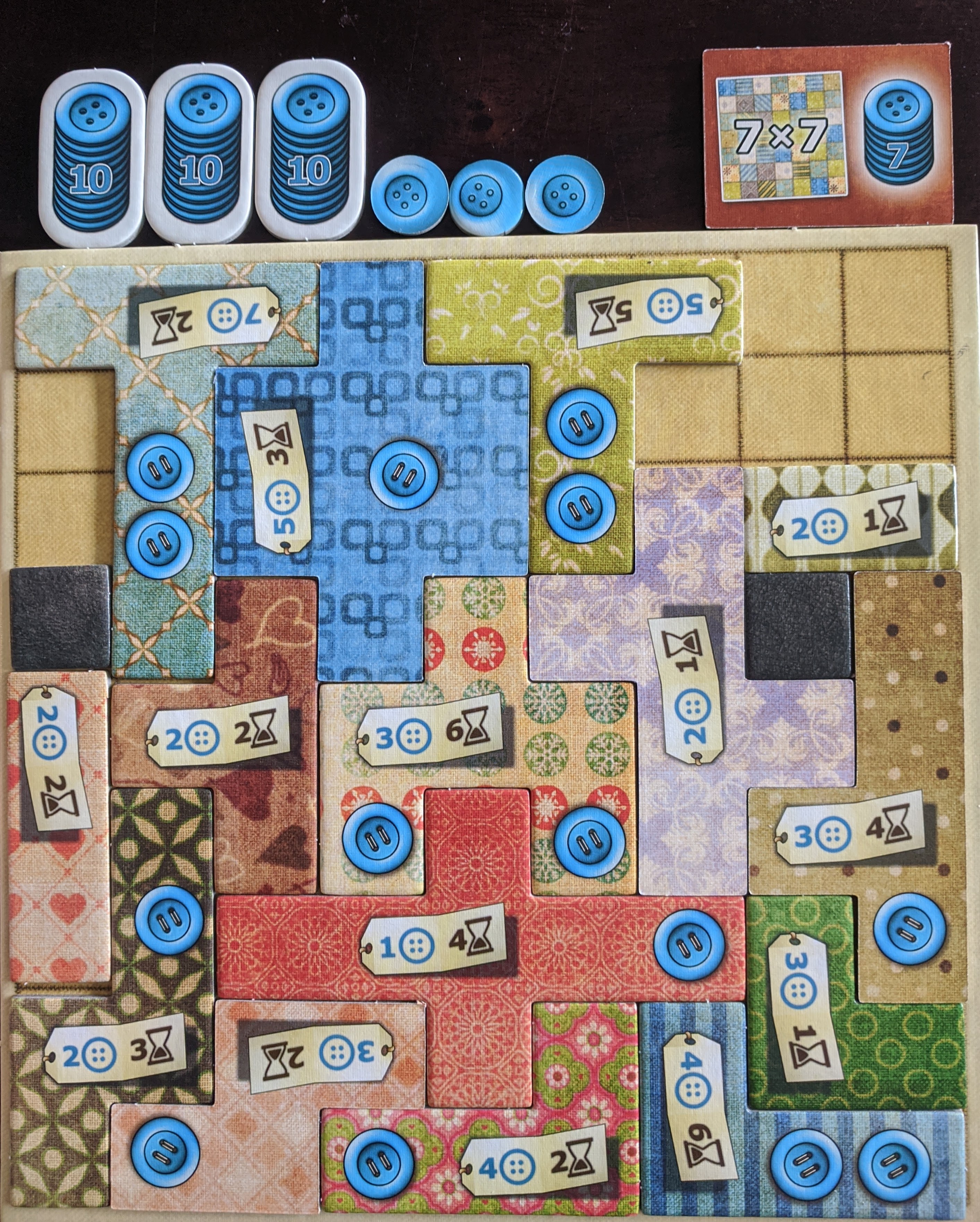 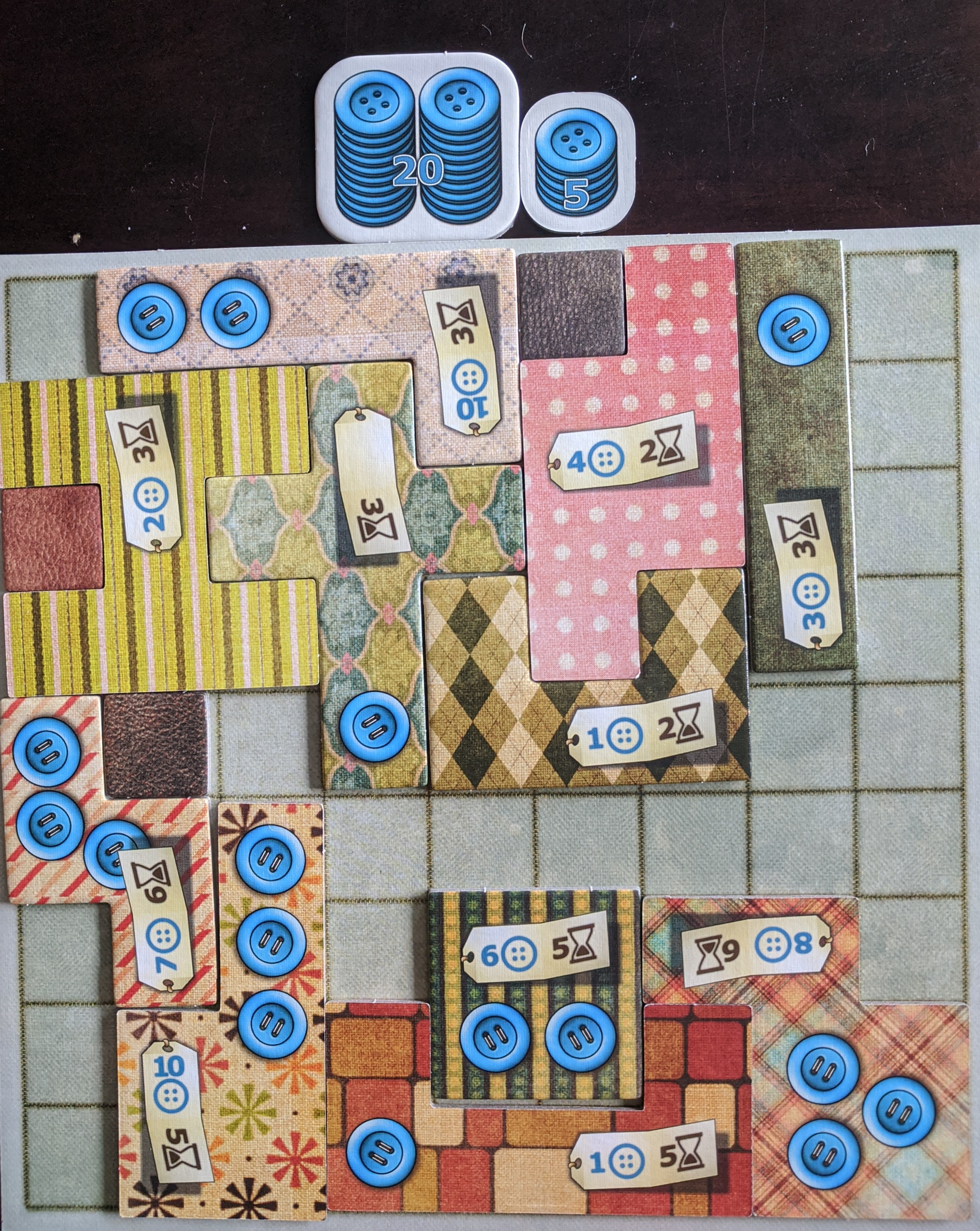 With a final polyomino spread of:

I almost got that P block but I was four away from it at the end and couldn't fit any of the others so was forced to advance to the center square. Final scoring is money - 2*(empty squares) + bonus tile. So I won with a score of 26 to -13. All in all I highly recommend the game. I think it's one of my favorite two player board games. I also really like the simplicity. Its really just a hair more complicated than blokus. My only gripe is that there is no F pentimino in the game. But I guess it would just be over powered at any price. Let me know if you have any recommendations for other two player board games.