Some Leaves: a Review

I've been really enjoying my time hiking in Washington. There are so many more leaves here than in Ohio. I thought I'd review some of my favorite ones.

Up first we have this friendly lobed one. 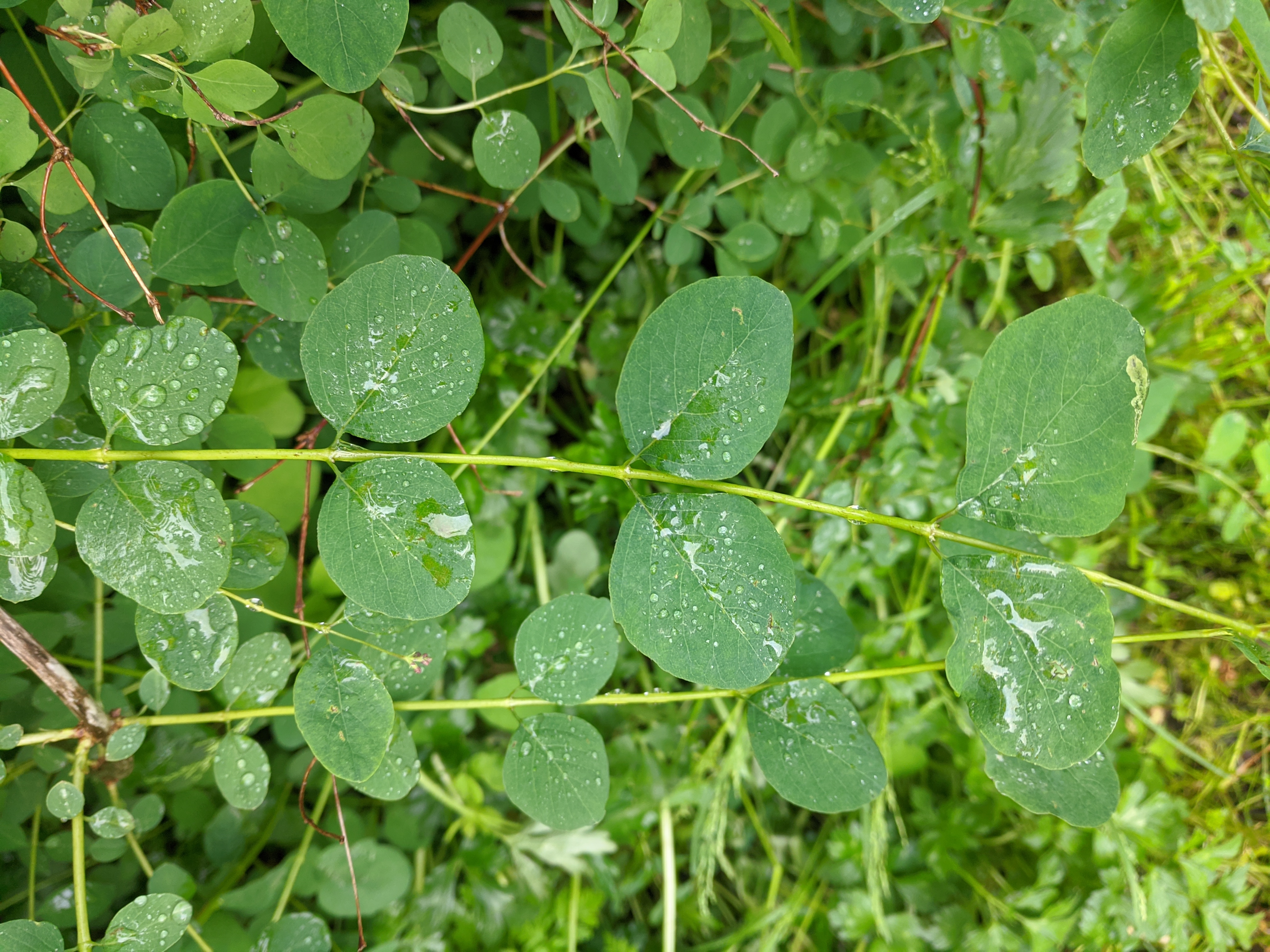 It's covered with water droplets because it rained most of the afternoon. These are some of the rounder leaves I've seen. In particular the pair three from the left are almost circles. It gives the leaf a friendly welcoming vibe. I'm partial to these leaves' shade of green. It's not too dark and fits well with the pale green stem. The plant itself is some sort of half vine half bush thing which blends in with the ground. A role player on the forest floor but a happy one. 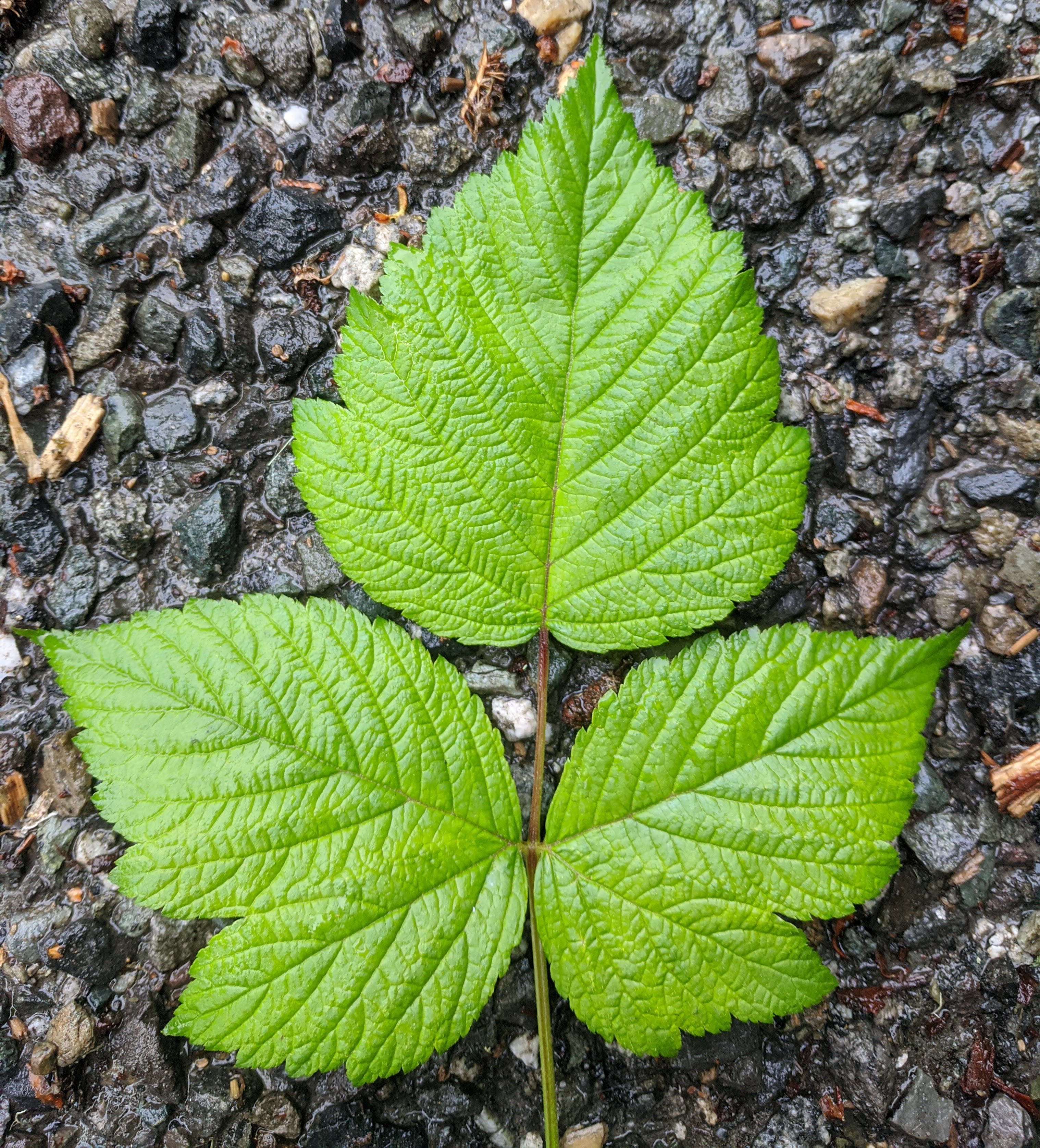 What first caught my eye about these leaves is the asymmetry. I only saw one of the triplet and didn't realize the leaf was part of a larger symmetric cluster. I was pretty disappointed. But it's still a nice leaf. I appreciate the spiky edges tapering to smoothness at the tips. It's neat how the center leaf looks like the two flanking leaves smashed together. 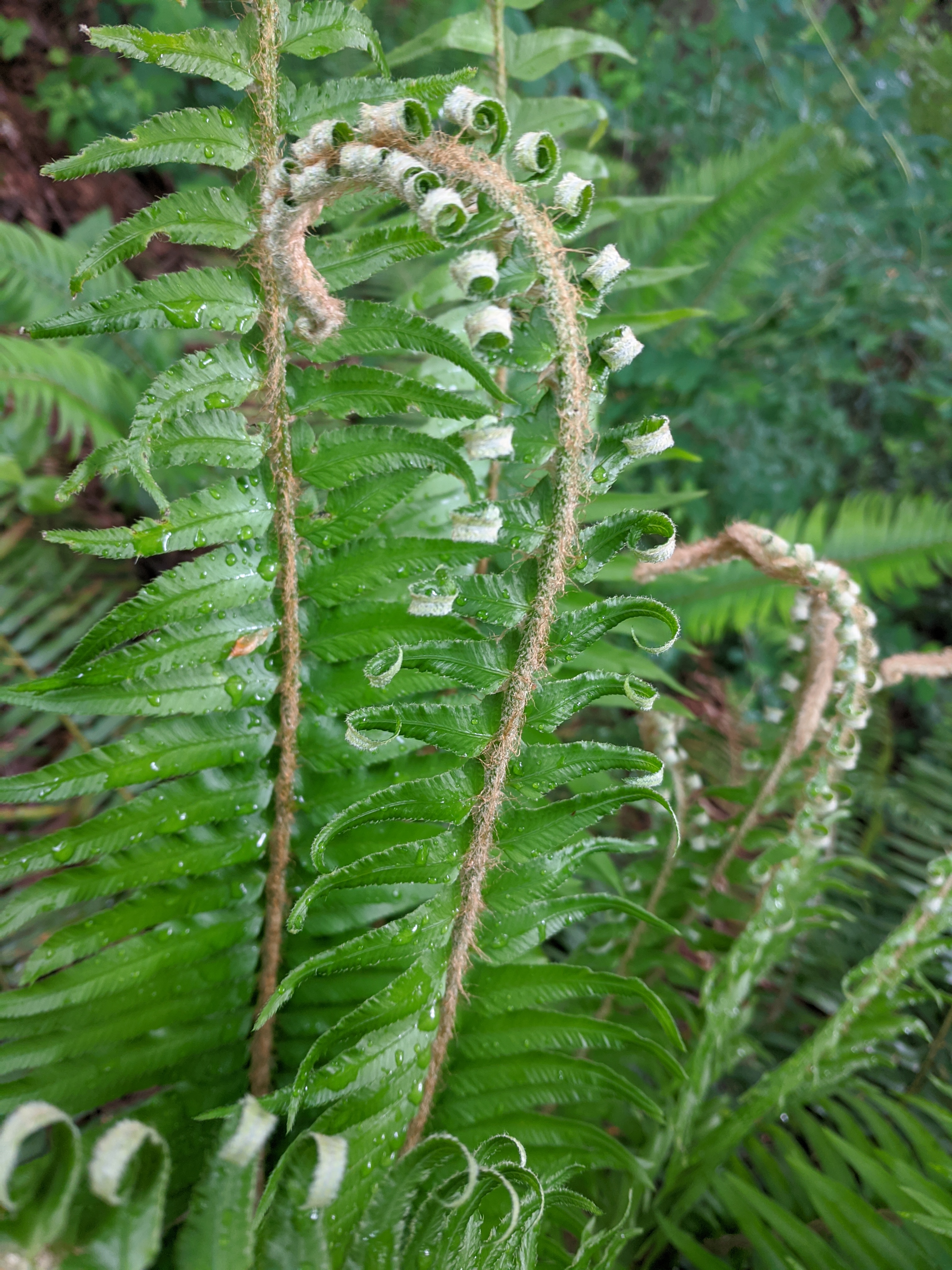 Here we have our first fern. This is a really impressive specimen. I love the way the curl of the stalk and of the leaves complement each other. I wonder what's going on with the leaves curling more tightly as the stalk curls. Is there some underlying cause? It doesn't seem adaptive to have leaves tightly wound like that. Don't they need to be upturned to the sun? Maybe they form wound up and unfurl as they grow. This is primarily a leaf review but I have to appreciate the hairy brown stalk. Also of note is the white underside of the leaves. 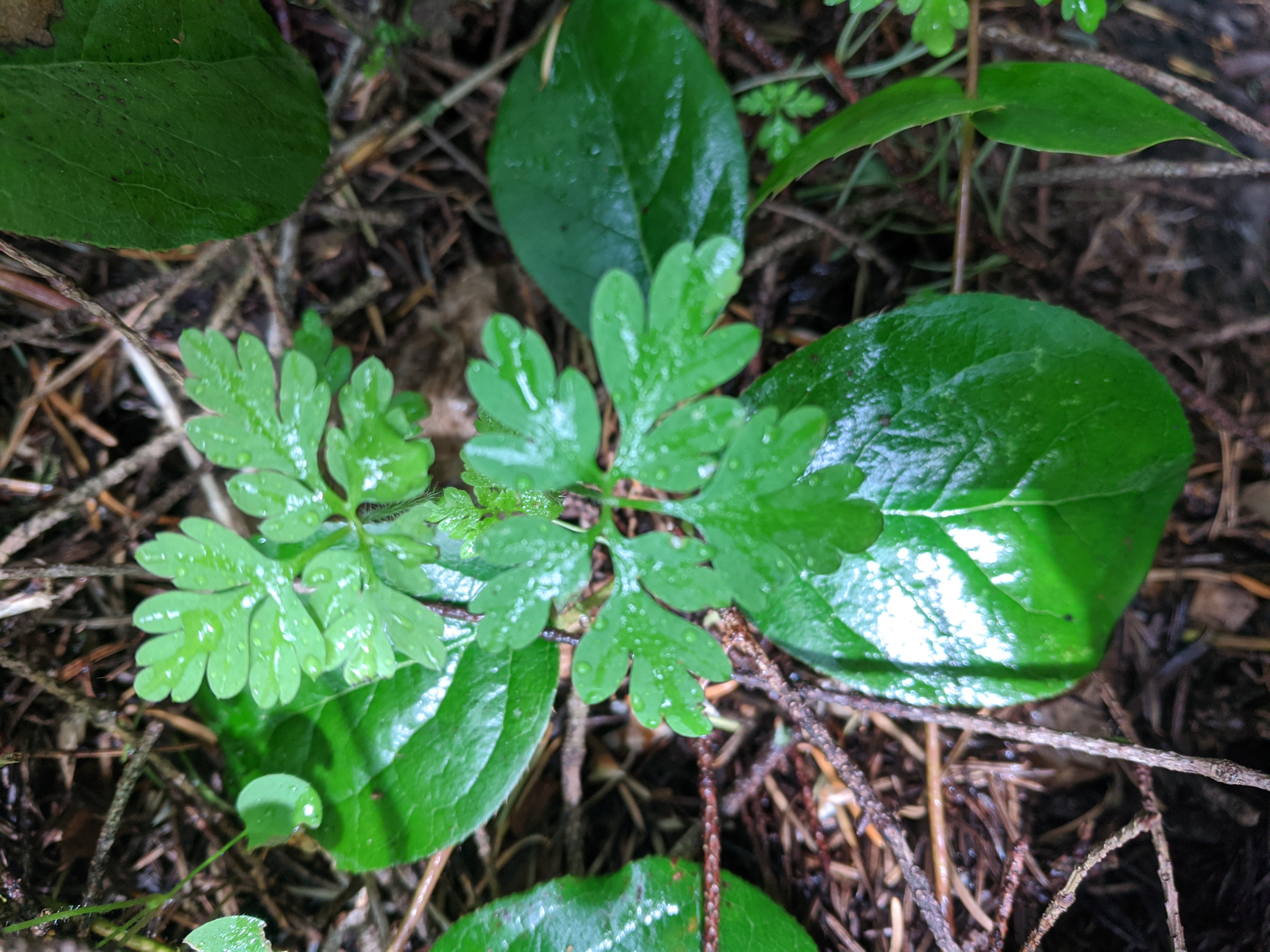 This is one of my personal favorites. I'm a sucker for deep grooves in rounded lobey leaves. There's just something really relaxing about it. I love the green stalk which blends right into the leaf. There's something interesting going on with the deeper greens in the middle of some of the leaves. Unsure if its the lighting or the water or an effect of the stalk. 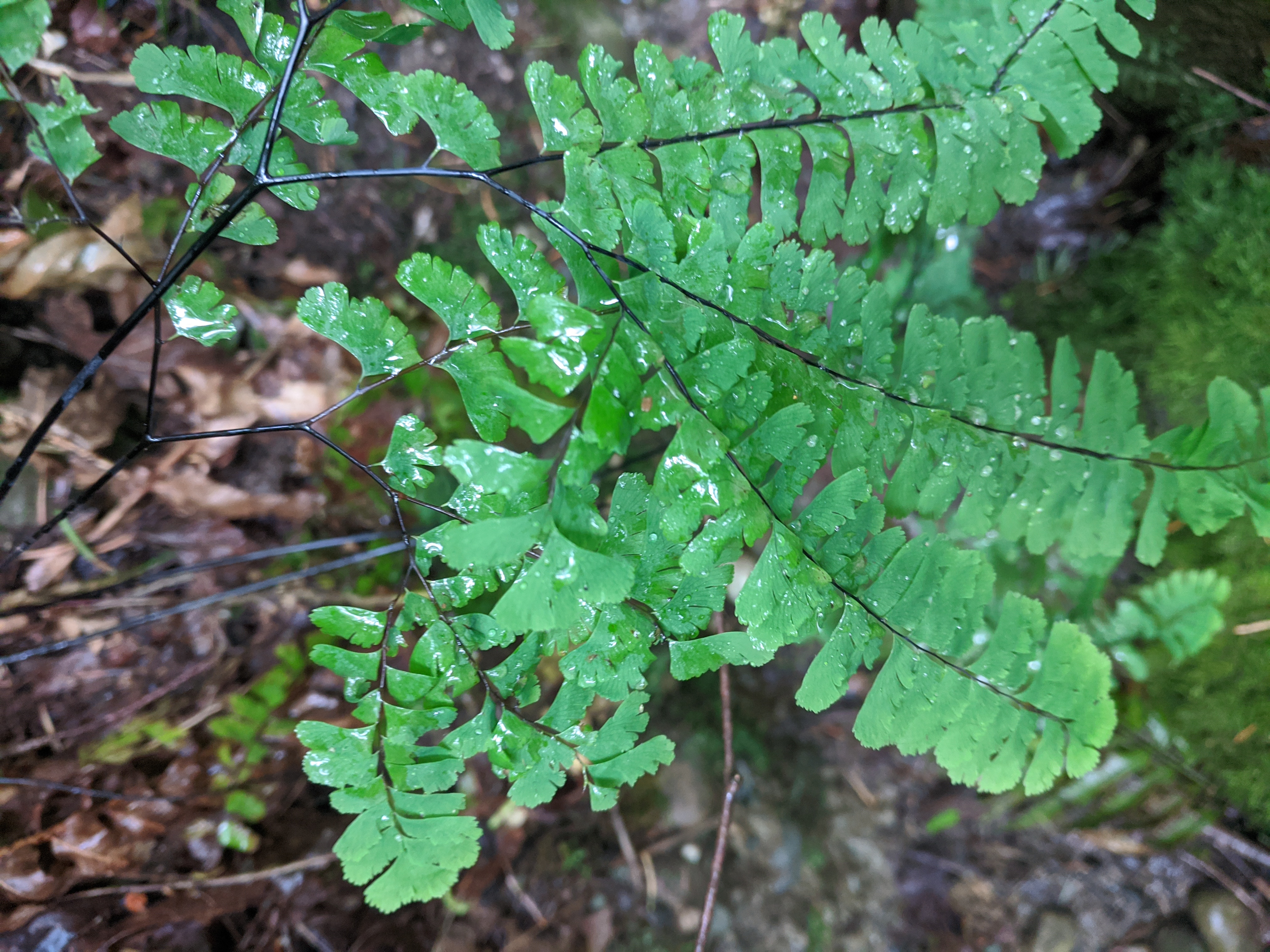 This one is Rhiannon's favorite fern. She says she likes the black wiry stalk. I'll admit it does frame the leaves nicely. The leaves themselves remind me of some kind of cross between clovers and tree leaves. They have flat bottoms where the vein seems to run and a perforated top. Unlike most ferns they have a rounded edge instead of a triangular taper. It makes them seem more familiarly tree like to me. The size of the leaves also doesn't taper towards the end of the branch. The leaves fourth from the end are basically the same width as those at the beginning. They end with a pleasant rounding of the leaves. 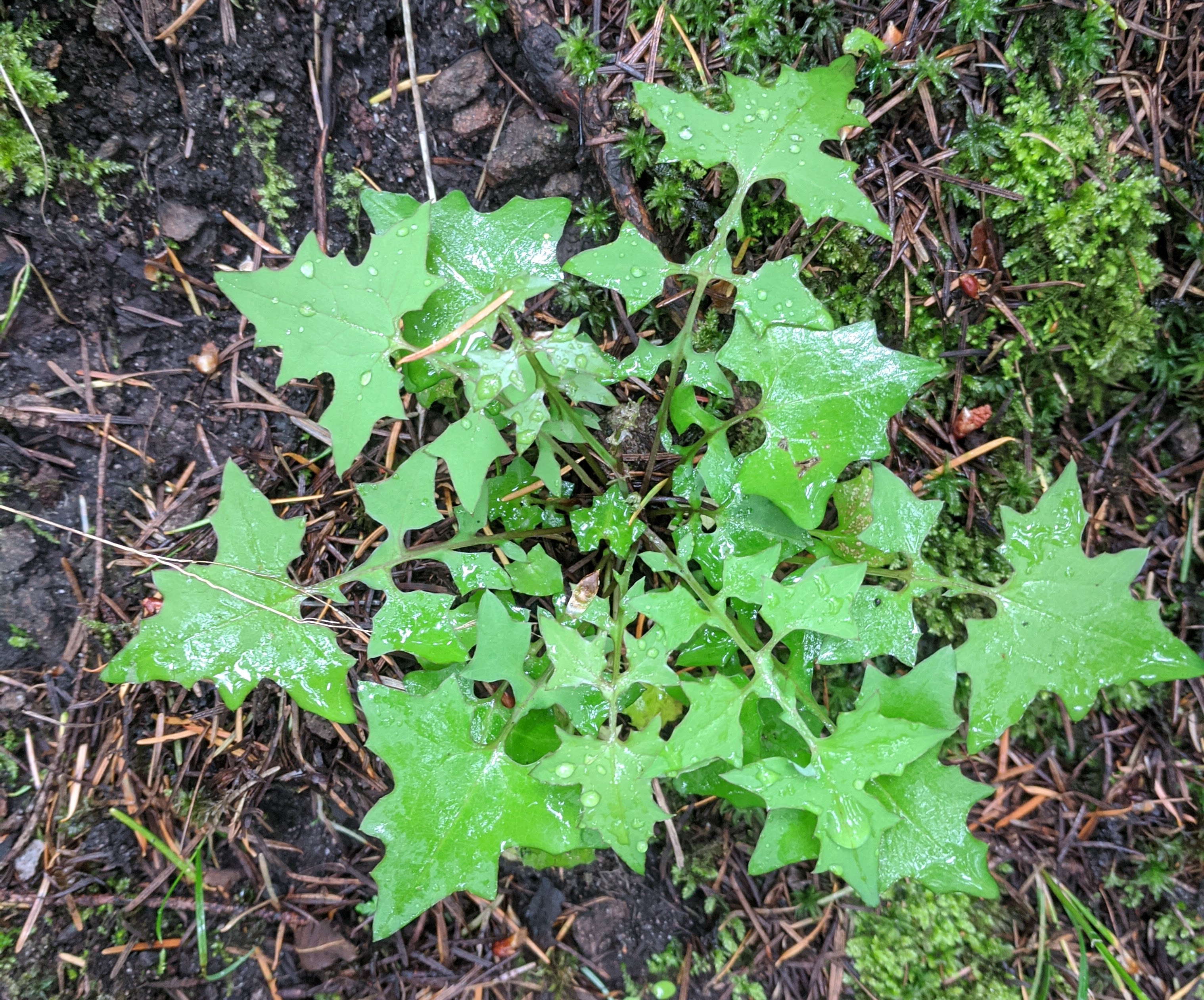 These jagged star like leaves remind me of the spaceships I used to draw growing up. I'm not the biggest fan. They're a little too complicated and vaguely threatening. They vaguely remind me of a Kock snowflake but without perforated edge which would complete the picture. Towards the base of the stalk you can see younger leaves that look like thin acorns. I'm not the biggest fan of that either. Young leaves should look like smaller versions of old leaves. 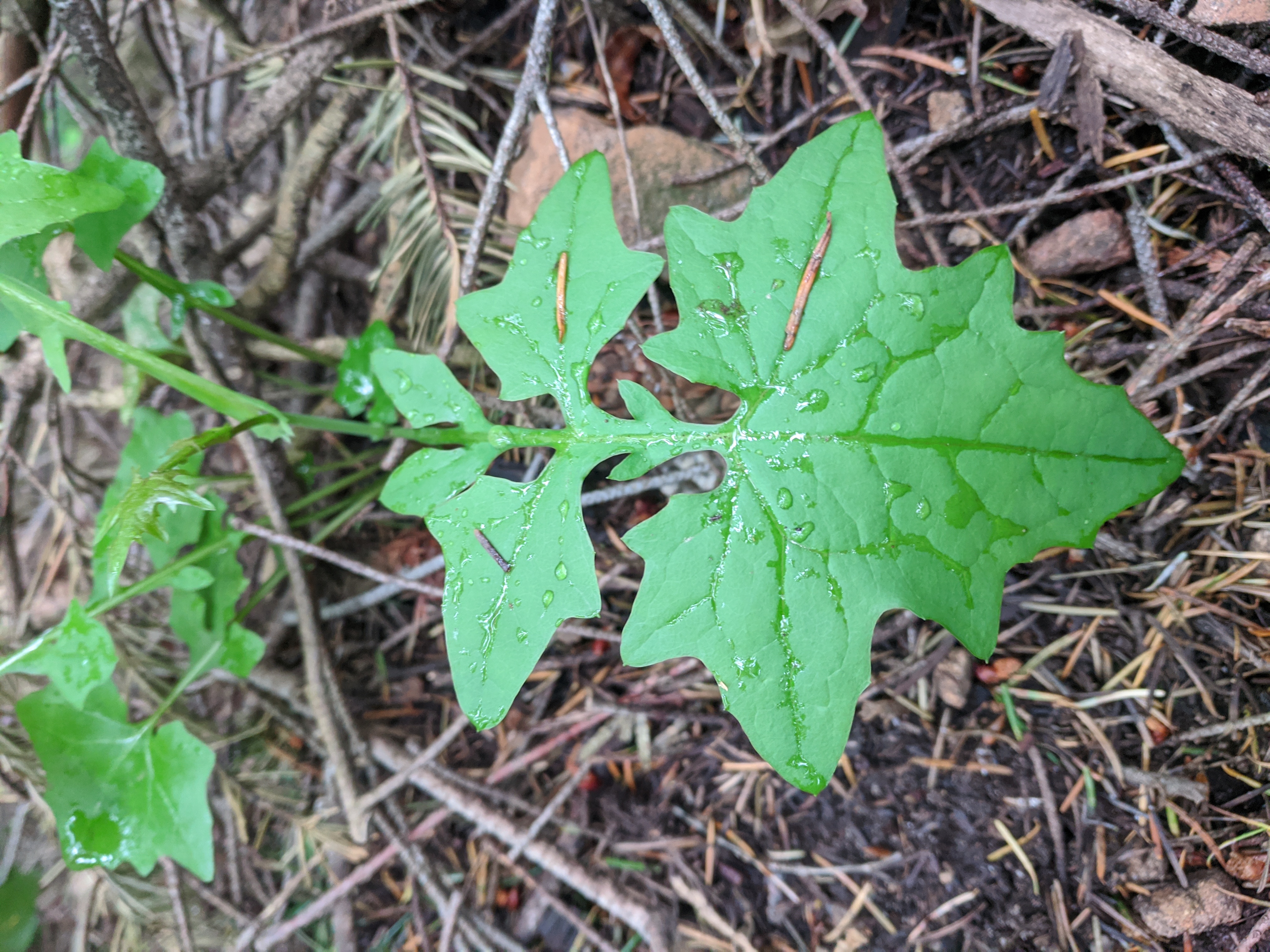 This one is honestly pretty similar to the last one but for some reason I find it preferable. The clearly visible darker green veins in the leaf make a nice pattern. I like the swept back smaller leaves behind the major leaf and its minor flanks. The negative space between the leaves is itself interesting.

These leaves look like ghosts or mittens I might have drawn as a child. I wouldn't really consider them serious leaves. The plant can't seem to get its secondary lobes right. Compare the middle lobes on the far right leaves and the second from the left leaves. At least the plant has got them evenly spaced on the branch. 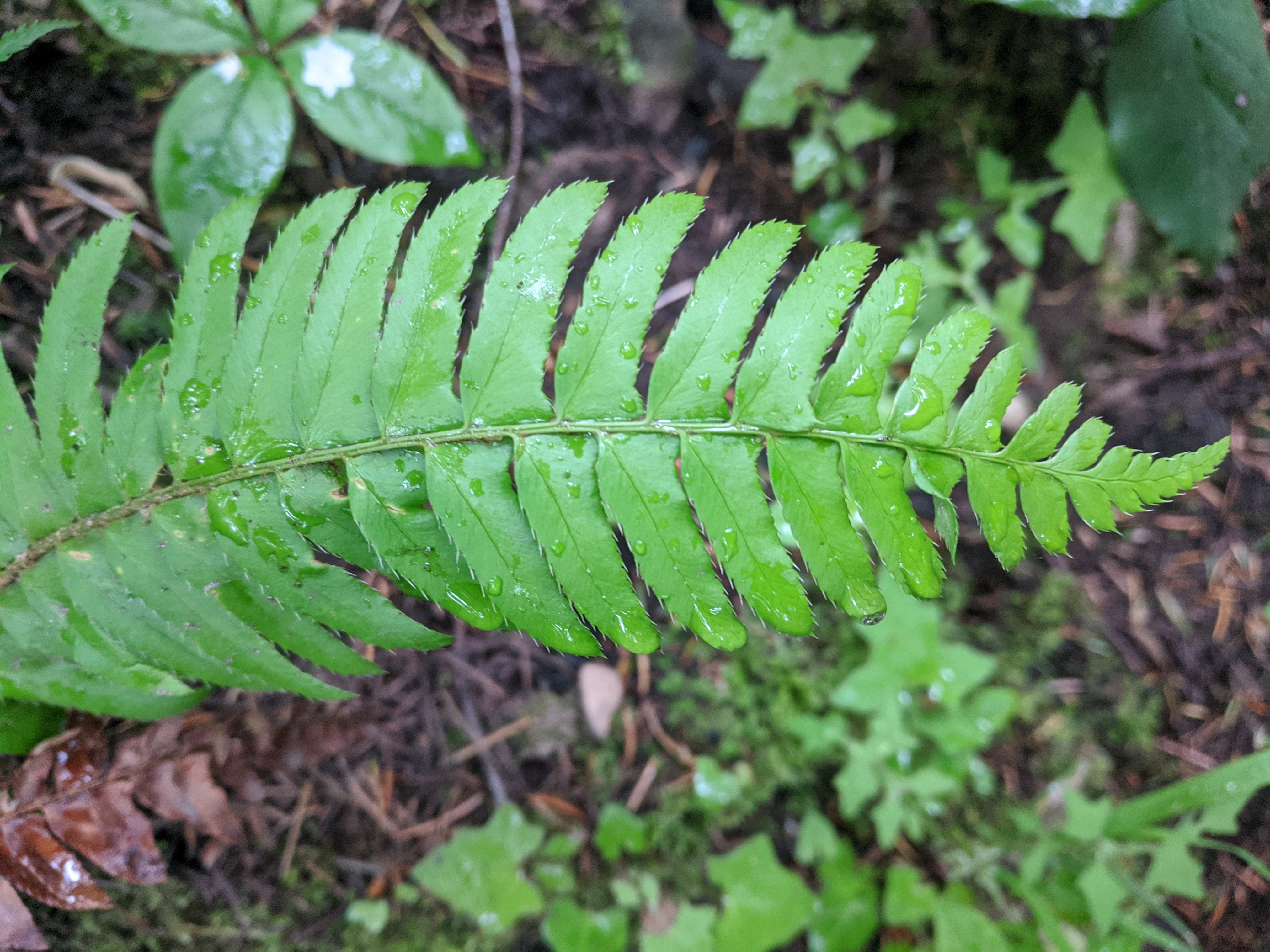 And we're back to ferns. I really like how this one is curling one way and then switches. It makes me hypothesize all kinds of things about plant physiology. Maybe this curve is more stable than being straight. Maybe the plant was growing after the sun when how it was shaded changed. The back and forth curvature mirrors the way the leaf tapers. First slowly, then very quickly and then there's an inflection point almost at the end. Also aesthetic are the jagged leaves. 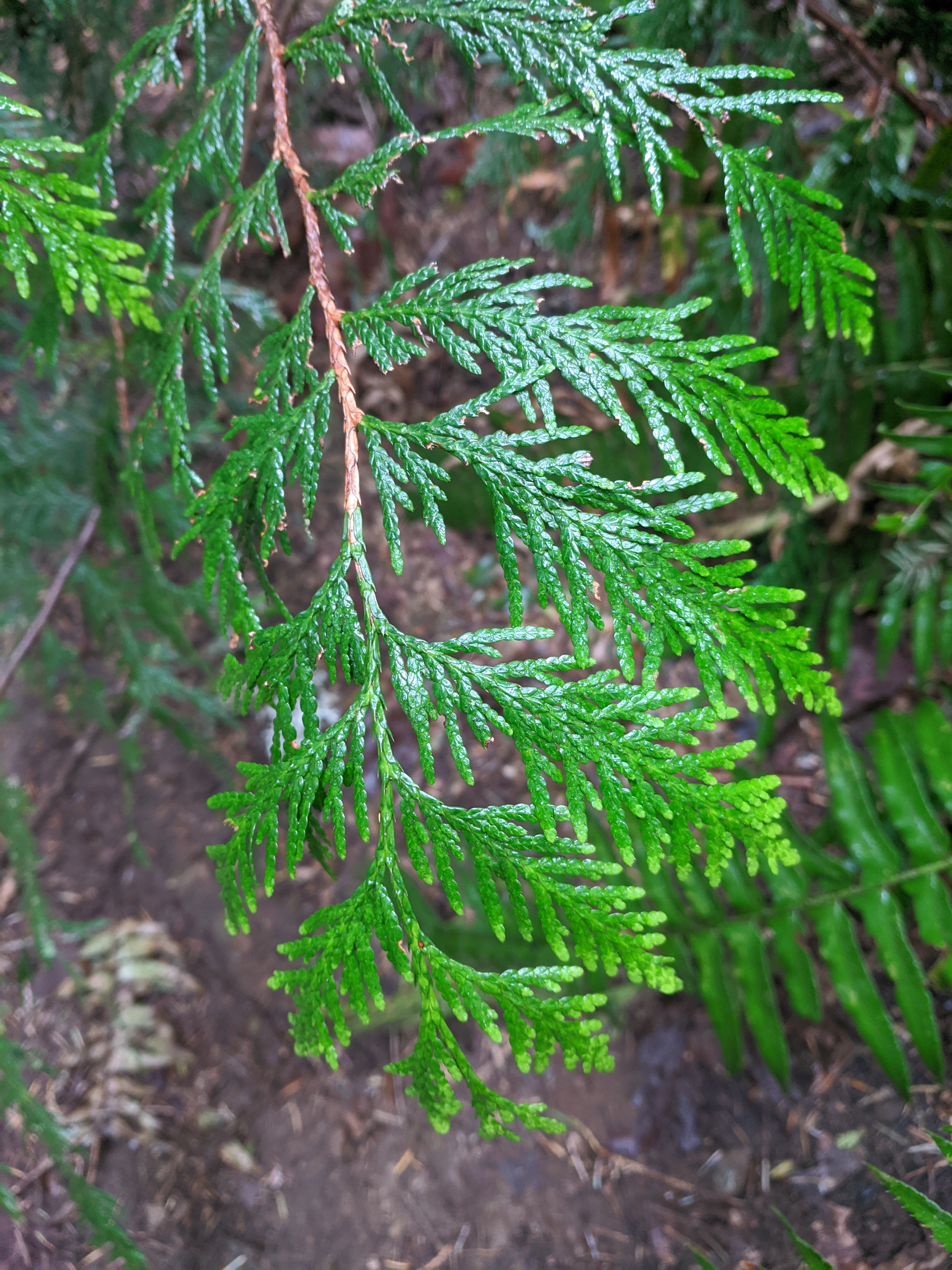 Now for something completely different. I really like the texture of these leaves. Unlike the ferns and deciduous plants we've seen so far which have a vein and membrane structure, these leaves seem to be made of cells almost braided together. You can't appreciate it from the picture but the leaves will crumble apart in your hands as you work them. I love the bright green at the very tips of the plant contrasting with the more central darker greens. It's interesting how the brown branch transitions easily into the green of the leaves. Notice also how the main branch turns away slightly from its offshoots which are antiparallel. Giving it a pleasant, but slight, zigzag. 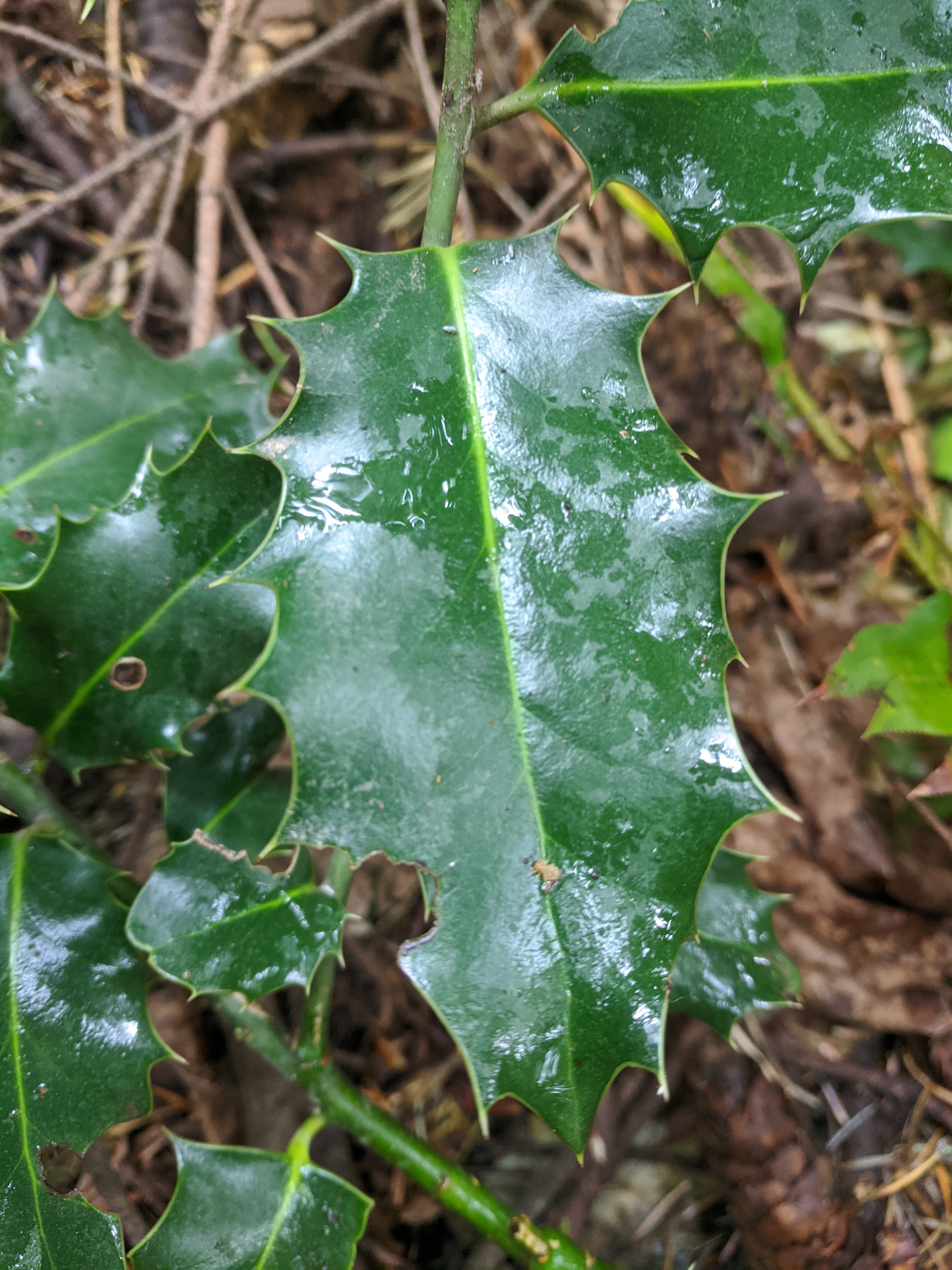 Here's a plant I can actually identify: holly. It has a very distinctive dark shiny green. And very aggressive points. I wonder why plants develop that. It doesn't seem like it would make it harder for an insect to eat you. Though I guess it would be harder to eat whole. So maybe its more for deer protection than caterpillar protection. The leaf itself is tougher than most so maybe that protects from insects. Something nice about this picture is the reflection of the canopy on the dew of the leaf.

I wish I had time to review every leaf in the forest. Every single one makes me ask so many questions about why it is the way it is. They have so much delightful self similarity. Let me know if any leaves spoke to you and reply with pictures of your favorite leaves. I'll leaf you with a few runner ups. 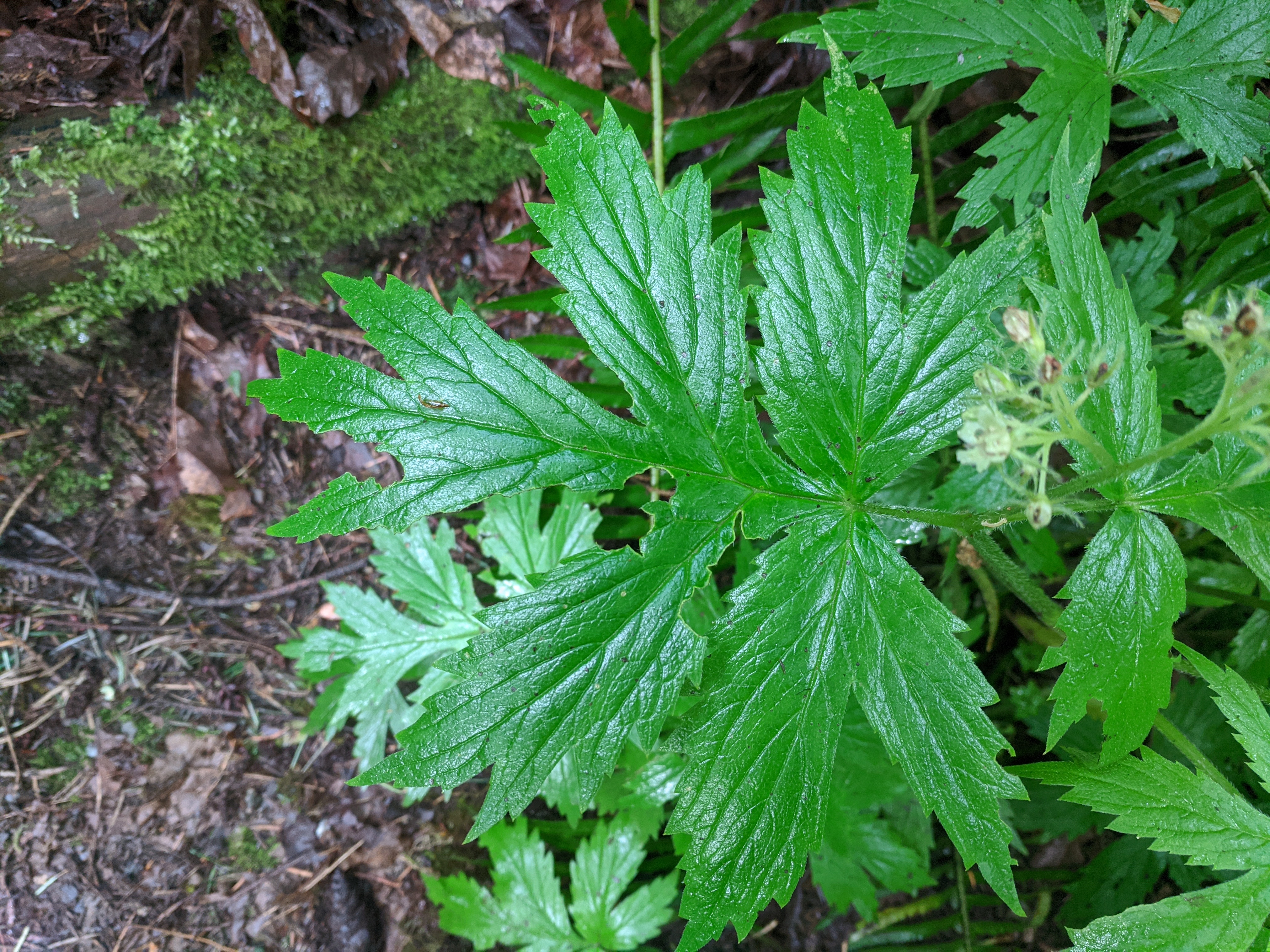 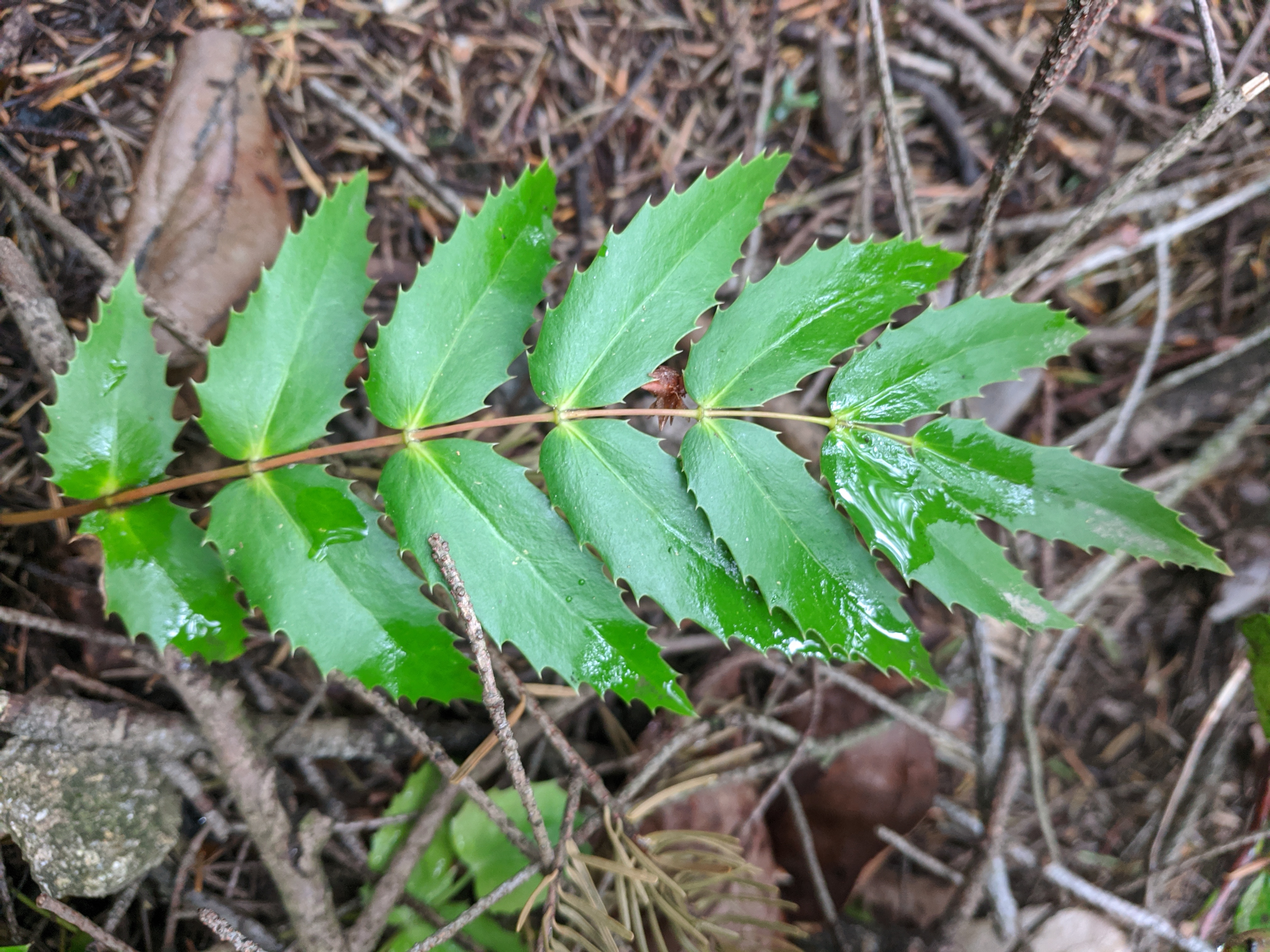 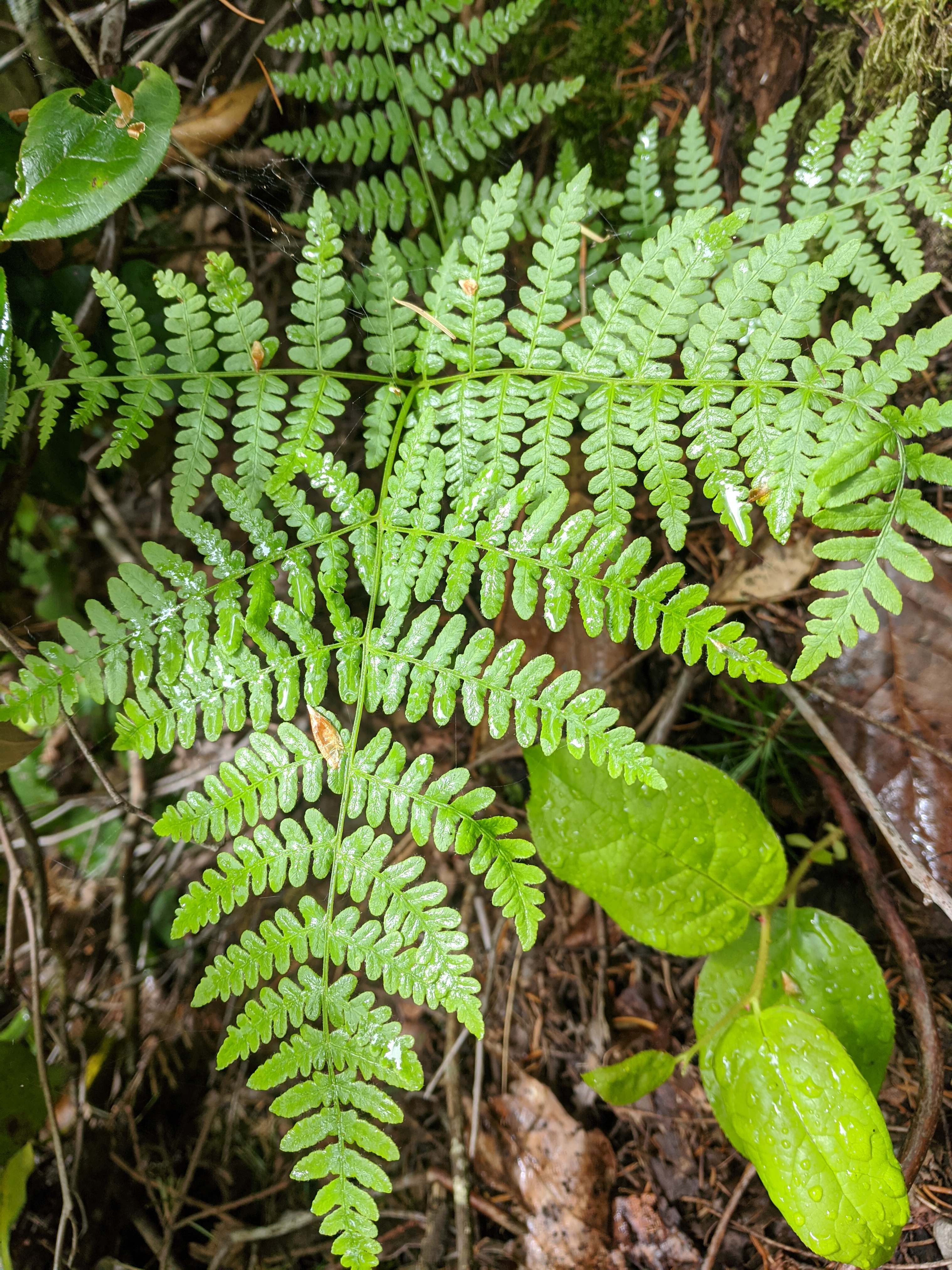 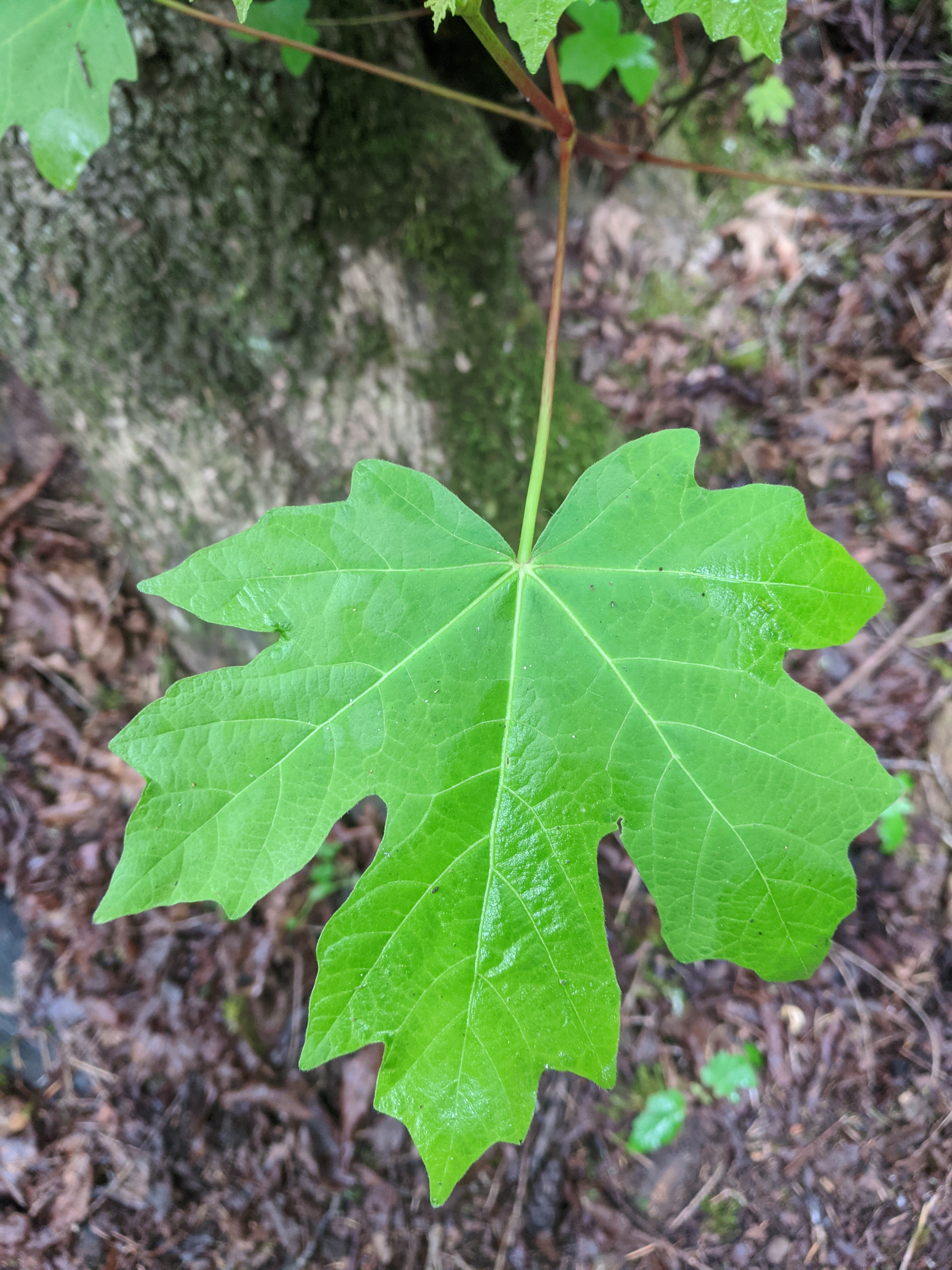 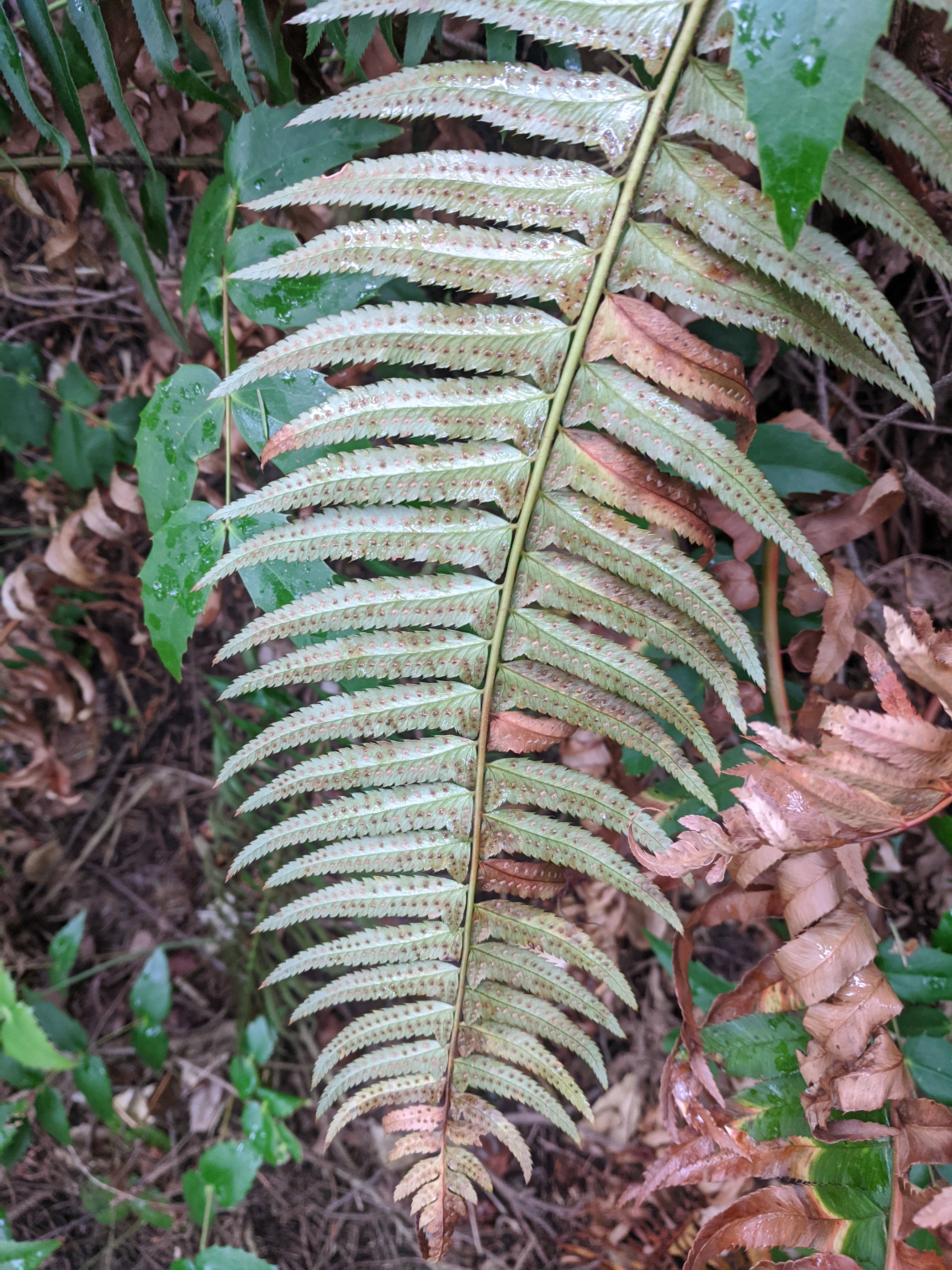 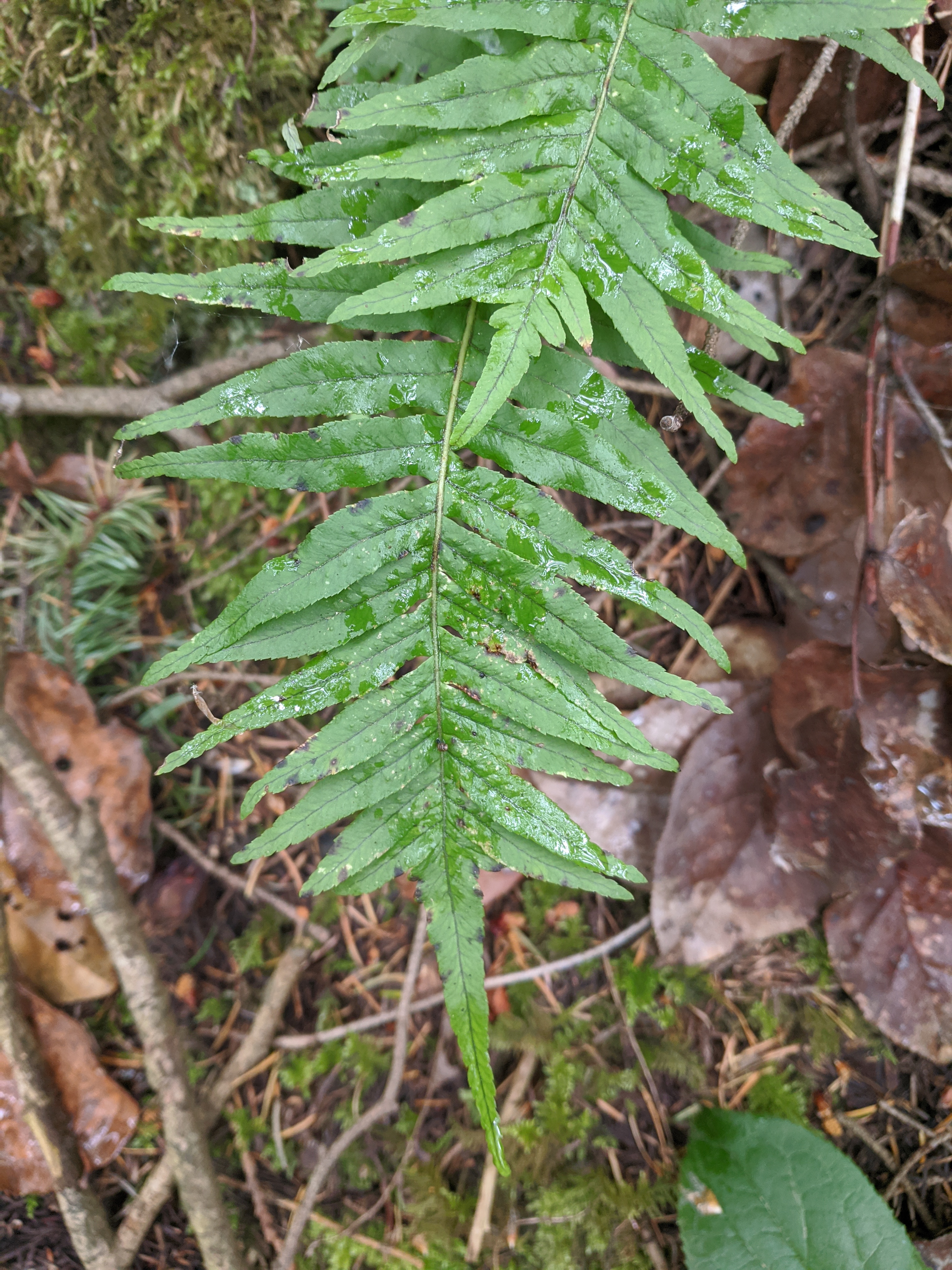 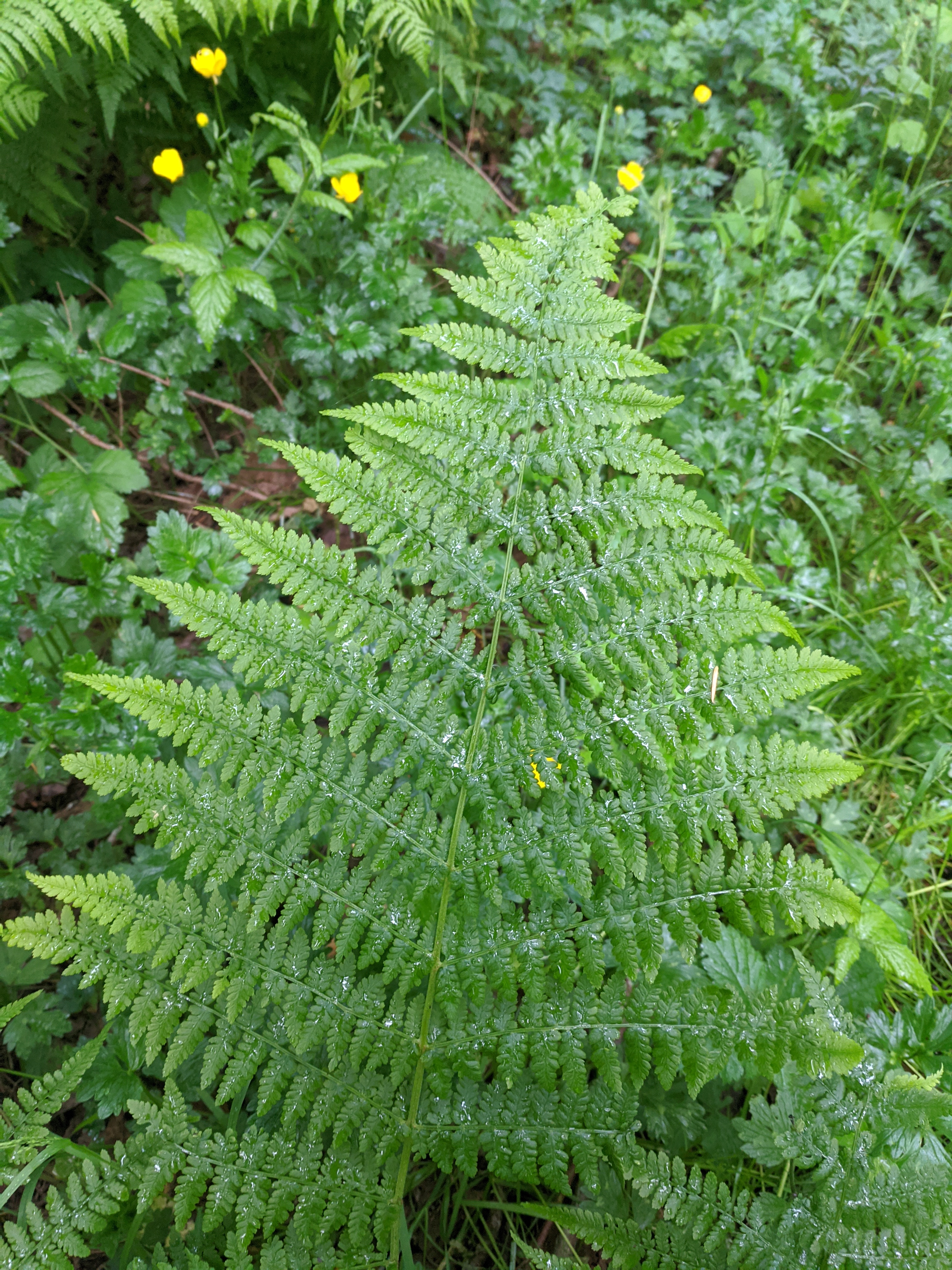 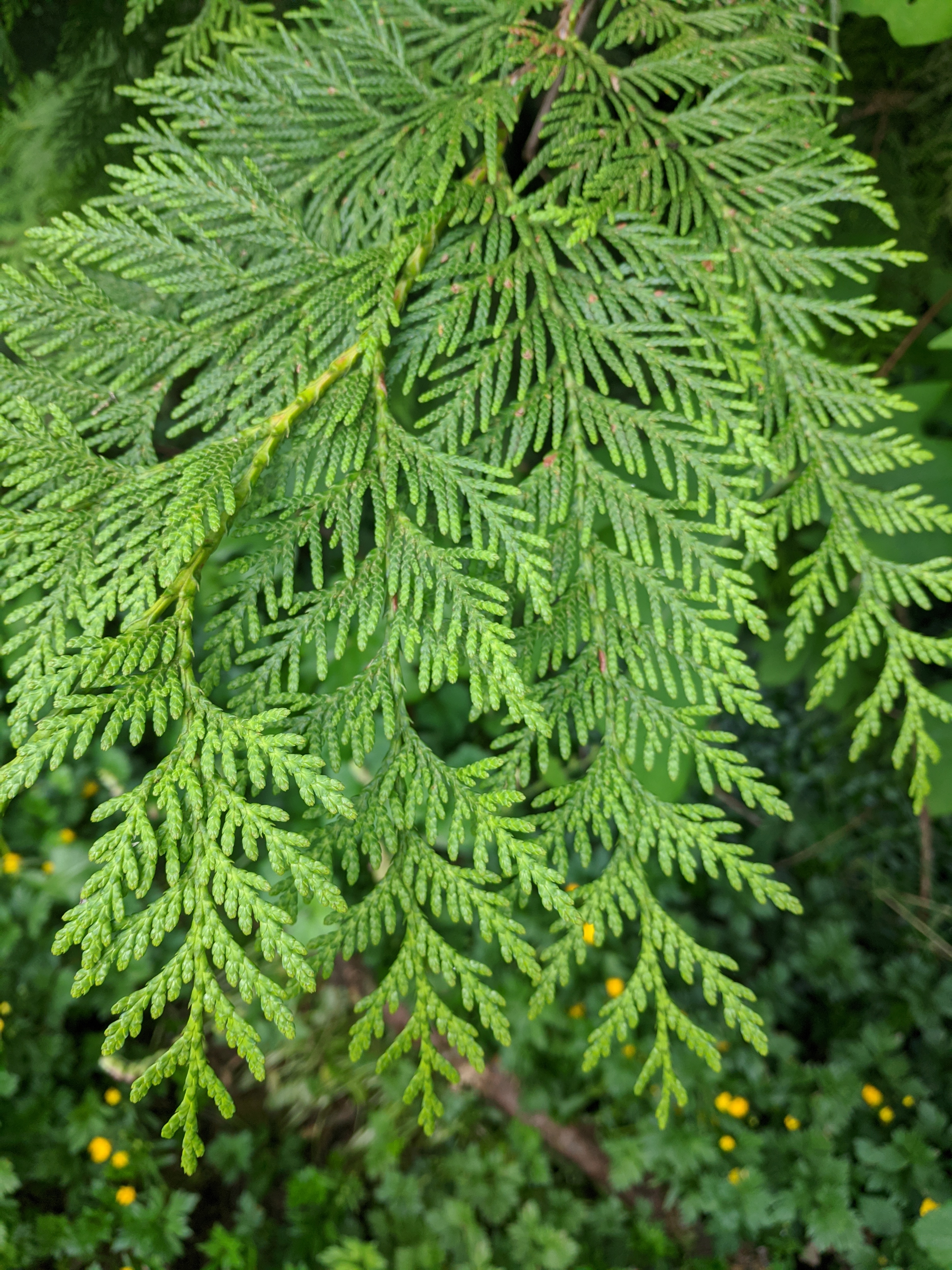